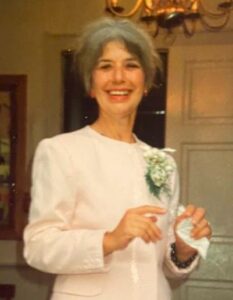 Marlene lived her life so fully right up until the end, that her passing was a surprise to most who knew her. We take solace in the lasting impression that she made with so many people and that her spirit will live on for many years to come.

Marlene was passionate about her surrounding area and until recently, she was very active in the Old Bridgewater Historical Society, serving on the board for many years. The community at the Brockton Unitarian church was also very important to her and she served as their organist for over 25 years. Music was an integral part of her life and she was a member of the Boston chapter of the American Guild of Organists. She started sharing her music as an organist at the First Church in West Bridgewater, where she was active for many years.

Everyone who ever knew her will have a story of her generosity, whether through food — her pies were legendary — or a potted plant left on a porch, or playing the piano at any event that required it. She was also an unofficial town worker — it wasn’t an uncommon sight to see her litter picking on the side of the road, or tidying up fallen twigs and branches after a storm.

After growing up together in Lititz, PA, Marlene and Jim shared over 61 years of marriage together and built a beautiful life in the home she lovingly cared for in West Bridgewater,. They had a somewhat adventurous early married life, living in New York City for several years, before moving to Boston, enjoying a brief stint in London, UK, then settling down in their current home in 1972.

Marlene had a keen artistic eye and was an accomplished painter. She would not leave a space in the home unadorned — a pot of seasonal branches or a piece of colorful fabric brightened up every corner. She was also an avid gardener and especially enjoyed growing hot peppers, that she and Jim devoured in surprising quantities. Those who had the opportunity to dine at the house were not only guaranteed a wonderful meal, but needed to be warned about the strength of the dried peppers on the table.

There will be an open house at the family home on Saturday, April 23rd from 3:00-6:00 pm. Guests are invited to bring some living, potted flowers to adorn the gathering, and take one home with them to remember her. Donations may also be made to the Old Bridgewater Historical Society, 162 Howard Street, West Bridgewater, MA 02379 www.oldbridgewater.org/donate