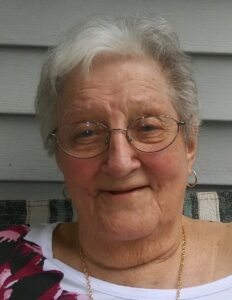 Mary J. Marinucci passed away peacefully in her sleep on July 10, 2019 in Everett, MA. She was born on May 26, 1931 in Boston, MA. The oldest of four children born to William and Mary Connelly, all of whom preceded her. Mary grew up in Roxbury, MA, attended Boston Trade School and graduated with a business degree. In 1960, she married her first husband and gave birth to a son, Michael. In 1975, she moved to Everett and married “the love of her life” Phillip F. Marinucci of Roslindale, MA and became a stepmother to Frank and Kevin. They remained happily married until his passing in 1997. Mary worked as a supervisor at Brigham and Women’s Hospital until she retired. Mary enjoyed talking and reminiscing, she had amazing stories and a great memory! She had a green thumb, enjoyed knitting, reading books, doing crossword puzzles, getting her hair done and drinking Kahlua. Most of all, she enjoyed spending time with family and friends.

Mary had a direct personality, she was sweet, fun-loving, kind-hearted, happy and an amazing woman, who was loved by all who came in contact with her. She will be greatly missed.