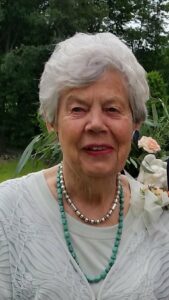 Mary Janet (Baxter) Barger, a resident of Winchester since 1961, passed away at home of pancreatic
cancer on Wednesday, March 27. She was 92.
Mary was born on March 10, 1927, to Ted and Harriet Baxter in Liverpool, N.Y., where she grew up. She
was a graduate of Goodyear-Burlingame School in Syracuse, N.Y., and the Cornell University School of
Home Economics, class of 1950. On September 30, 1950, she married J.P. Barger. They raised two
children, Jeffrey and Melissa.
Mary was a dedicated volunteer serving many organizations in her community, including the En Ka
Society and the Winchester Garden Club, and Boston Ballet, where she was for many years a member of
the board of trustees, later becoming a trustee emerita. She was an outstanding cook, a talented
gardener, an impressively skilled knitter, and the undisputed captain of her expertly run household.
Elegant, intelligent, and ever gracious, she made an indelible impression on all who knew her.
Mary is survived by her beloved husband, J.P.; her dearly loved son, Jeffrey, and his wife, Cynthia
(Roach), of Woodstock, VT; and her cherished daughter, Melissa, and her husband, Owen Baern, of
Littleton, MA. She was the treasured grandmother of James Barger and his wife, Kelly (Gallagher),
Michael Barger, and Scott Barger, all of Woodstock, VT; Margaret Barger, of Salt Lake City, UT; and
Maxfield Baern and Theodore Baern of Littleton, MA.
A celebration of Mary’s life is planned for a later date. Her family requests that no flowers be sent,
please. The family respectfully suggests that a donation to the charity of your choice be made in her
name if you wish to honor her memory in this wise.