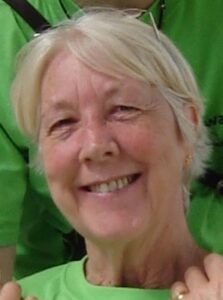 Maureen FitzHenry Poggi was born on December 7, 1946 and passed away on August 2, 2016. 1946-2016. Maureen heard a poem once about how the dash between the birth and death dates is the most important part as it represents a whole life. Maureen was a daughter, a granddaughter, a sister, an aunt, a cousin, a wife, a mother, a grandmother and a friend. She was a student, a teacher, an athlete, a sorority sister and later a room mother, a den mother, a girl scout leader, PTA president, T ball/softball coach and member of the School Board. She called Tenafly, NJ, Kirksville, MO, Adams, NY, Honolulu, HI and later Cambridge, MA and Winchester, MA home. She was a secretary and worked with SMA Fathers, Horn & Hardart, the Tug Hill Commission and Safeguard Business Systems. She always said that being a Mom was her calling and she did everything she could to make her “corner of the world” a good one, wherever that may be. She was kind, giving, strong, brave, outgoing and funny. She will be missed.

Maureen is survived by her son Christopher T. Poggi, his wife Ryoko Ono Poggi, their children Kira and Nina, and her daughter Karen M. Poggi, her husband David Cantrell and their daughter Riley. She is predeceased by her husband Roger R. Poggi Jr., her brothers Richard and Donald FitzHenry and her parents Gertrude Loretta (Ryan) FitzHenry and Richard Horton FitzHenry.

There will be a memorial mass in her honor at the Gables of Winchester at 299 Cambridge Street, Winchester, MA 01890 on Saturday, August 13, 2016 at 11 a.m. In lieu of flowers, please donate to a charity of your choice or Maureen’s favorite charity, St. Jude Hospital, and be a good person.