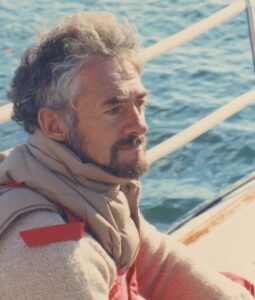 Michael F. N. Michaud of Marblehead, Massachusetts died on October 11, 2021, at the age of 84. He was born at home in Lawrence, Massachusetts and died peacefully at home in Marblehead, surrounded by his loving family. Michael bravely and determinedly bore the increasingly limiting effects of a stroke for over six years.

He attended Sacred Heart grammar school in Lawrence. In 8th grade, he entered seminary at Marist College and Seminary in Framingham, MA. Upon completion of his studies there, he changed course and entered the Master’s program in Philosophy at UMass Amherst. An introspective man, avid reader, lover of history, and collector of art and literature throughout his life, Michael never lost his enthusiasm for exploring the world of ideas and his quest for knowledge.

Michael’s love of books led him to his life’s work in the publishing industry where he specialized as a book production manager. He worked at Addison Wesley, Prindle Weber & Schmidt, Applewood Books, and his own freelance business, Unicorn Productions, which produced Houghton-Mifflin’s Sports Almanac. This project combined his love of books with his passion for sports. A prolific writer, Michael’s journal keeping and two self-published novels were a deep source of satisfaction.

Being near water gave him life. Michael loved living on the neighborhood pond and spent many hours beholding the wildlife around it while sitting on his bench at the water’s edge. He also enjoyed kayaking and ice skating upon it. Michael loved his neighborhood by the sea, where he lived for over 40 years. He volunteered for committees, including the Waterfront and Lobster Bake as “Bakemeister,” happily showed up in costume for the neighborhood Horribles Parade on the 4th of July, and brought fun and laughter to every cocktail party. He met his wife, Lynn, in the neighborhood and was proud to boast that together they had once won the egg toss at the annual 4th of July games on the “green.”

Michael’s deep love for the sea led him into a partnership on a J35 sailboat, which gave him the satisfaction of several winning seasons in Marblehead’s Wednesday night races. He and his partners sailed out of Marblehead and many ports in Maine during summer months. His first “real date” with Lynn was a sailing excursion on that vessel.

Of all his loves, the greatest was for his children. According to his brothers, remarrying and becoming step father to his young daughters Annie and Molly, and the subsequent birth of his daughter, Claire, fulfilled his life profoundly. He joyfully devoted many hours as dad, teacher, camping and hiking guide, canoe helmsman, coach, ref, and number one fan at soccer and field hockey games. He would have been completely engaged and devoted to his grandchildren wherever their interests took them.

He was predeceased by his father, Romeo Michaud born in Oldtown, ME, and his mother, Amanda Michaud born in New Brunswick, Canada. He is survived by his wife of 32 years, Lynn (Mercer) Michaud of Marblehead, his daughter, Claire Michaud of Beverly, MA and her partner, Dominic Brown; stepdaughters, Annie Hughes and husband James Lee of Barrington, RI, and their sons, Carter and Caleb; Molly (Hughes) Shively and husband Peter Shively of Wellesley, MA and their sons, Will and Graham. He is also survived by his brothers: Martin Michaud and predeceased by Marty’s wife, the late Pauline Michaud of Methuen; Richard Michaud of Boston; Dennis Michaud and his wife Janice of Los Angeles, CA. He leaves nephew Marc Michaud and wife Bonnie; niece Darlene Michaud; nephew Michael Michaud and wife Angelica; niece Kathy (Michaud) Thomas and husband Jason and a number of grand and great-grand nieces and nephews.

The immediate family will be celebrating Michael’s life in a private gathering.

In lieu of flowers, please consider donating to Care Dimensions (formerly Hospice of the North Shore), which provided great help and comfort to both Michael and Lynn.