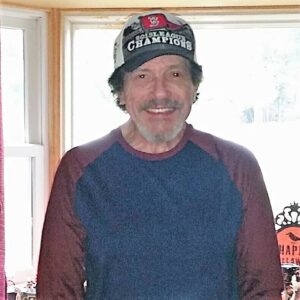 Michael J. Rufo of Peabody passed away at the age of 64 on Tuesday, May 1, 2018 after a strong and courageous battle with cancer. He was in the comfort of his home with his family and dog by his side when he passed.

Michael was born in Malden, MA on October 28, 1953 to the late Joseph and Catherine (Holland) Rufo. He was the brother of the late Catherine (Rufo) Foley of Woburn, MA.

Michael graduated from Malden Catholic High School where he was Tri-Captain of their football team; he then went on to attend Boston College. Michael was always passionate about science and math, and this drove him to pursue his Doctorate in Physics. Michael started off as a history teacher and went on to work in property management. Eventually, Michael combined his love of sports and teaching and became a high school football coach.

Michael was married to his best friend, Lynne Rufo, for 23 years. He was a doting father to his four daughters and a loving grandfather to his nine grandchildren. Michael enjoyed cooking in the kitchen with his girls while singing along to his favorite music. Michael also had a love for animals, especially dogs.

Michael is survived by his beloved wife, Lynne F. Rufo; his four daughters, Jenniffer and Jeff Mooney of NH, Charissa Parker and Adam McLaughlin of Bellingham, Kristy Rufo and Michael Nardone of Lynn, and Tara Rufo and Johnny Pine of Newton; his grandchildren, Liam, Samantha, Lily, Deirdre, Sophia, Michael, Maggie, Andrew, and Declan; and his dog, Chaco. He is also survived by his sister, Betty Tricca, of FL.

ARRANGEMENTS: Michael’s family will have a private memorial service and a celebration of life. In lieu of flowers, memorial contributions may be made in Michael’s name to Northeast Animal Shelter, 347 Highland Avenue, Salem, MA 01970.