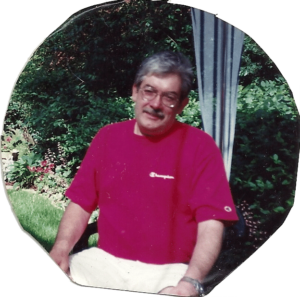 Michael Joseph MacDonald passed away peacefully after a lengthy illness on September 19, 2018. He is survived by his daughter, whom he adored, Sarah E. MacDonald of Salem MA; sister Linda S. MacDonald of Malden; brother Daniel MacDonald of Billerica; sister Gail A. Marchione and her husband Thomas A. Marchione of Malden; his former wife Deborah L. Medur (Tait) of Lynnfield; and Billy Bob Joe, his faithful feline. He is the beloved son of the late Alfred J. “Mac” MacDonald and Alice S. (Cole) MacDonald of Everett and Charlestown.
Michael spent his formative years at the Charlestown Boys Club, where he perfected his culinary skills as a member of the Chefs’ Club. In 1970 he graduated from Roslindale High School. Despite being born legally blind, Michael was an avid photographer and a gifted artist. He won the Boston Globe’s Scholastic Art Award, presented by the School of the Museum of Fine Arts.
In the 1980s, Michael married and moved to Peabody, where he managed a large cafeteria at Sears in the North Shore Shopping Center with his wife. He was a Concession Manager with the Vending Facilities Program of the Massachusetts Commission for the Blind and went on to become an Advocate for other vendors in the program. In the 1990s Michael left Sears to manage Mike’s Place at Hanscom Air Force Base in Bedford, MA. This was a larger venue and Michael and his staff prepared and served upwards of 600 fresh lunches a day. Michael and his wife also ran a successful catering business. Michael spent his retirement years in Malden, gardening and fixing anything, especially his many antique clocks.

Memorial services will be private. In lieu of flowers, donations may be made to the Charlestown Boys and Girls Club of Boston, 15 Green St., Charlestown MA 02129.