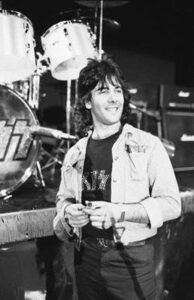 Michael “Mick” Campise of Boston, MA formerly of Houston, TX passed away on June 18, 2013. Born and raised in Houston, TX Michael graduated from the University of Texas, Austin in 1973 majoring in Political Science. While working in big oil in New York, he met and became friends with Peter Criss of the rock band Kiss and began his career in music working as the production manager for Kiss throughout the 1970’s. He returned to Houston in the 80’s and taught history in secondary school. While vacationing in Provincetown, he met his life partner David Pauling, with whom he spent the last 23 years here in Boston. Mick leaves behind his brothers, Joseph & Bubba, and his two sisters, Rosanne and Diane, all of Houston, TX, and his niece and goddaughter, Lauren Campise. Through the years he maintained many of his relationships in the music industry especially with his dear friend Lydia Criss. His life will be celebrated at a memorial service in Las Vegas in August.