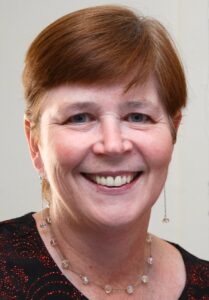 Patricia Ann Welch, 63, of Salem lost her battle with cancer and passed peacefully on December 26, 2016 at Kaplan Hospice House in Danvers, surrounded by family.

Born June 3, 1953 in Brighton, Mass., Patti was a lifelong resident of Salem, the third of what would be eight children of Francis Lawrence and Patricia Jennings-Welch. She attended St. Mary’s and St. James High School, graduating in 1971.

It was during this time that she began playing the French horn and guitar, launching her lifelong love of music. She married Daniel Walker on St. Patrick’s Day 1979 and had two children, Bethany and Liam. She attained her bachelor’s degree in Biology from Salem State College.

She worked at Solarterre-e-em and The Greenhouse School, founded by her mom, serving as director until 1985. She remained active in school life and later joined the school’s Board of Directors. Students remember her fondly as Ms. Patti. In 1985 she joined the Biology Department at Salem State College (now University). For 30 years she supervised the biology labs, and there is hardly a SSU biology student who has not come under her tutelage over the decades.

An avid music lover and beautiful singer, she performed over the years in many local choirs and groups including the Paul Madore Chorale, the Salem State University Choir, and the Greater Lynn Concert Singers. She was active in scouting, serving as local den leader even after her son Liam achieved Eagle Scout. A talented artisan and jewelry maker, she founded The Silver Unicorn as yet one more activity in a dizzyingly busy life. She loved skiing and camping, and spent countless hours of enjoyment with her family at Shawnee Peak and Dolly Copp. She also loved the ocean and never tired of the beauty of New England’s coast, especially on stormy days, when she would take her siblings or children to witness the power of the surf.

In 2008 she married Lynne St. Onge with whom she spent eight wonderful years together before her passing. Patti was active in local affairs as well, serving as Board Chair of the Salem First Universalist Society and co-chair of the merger committee that eventually saw the union of this old congregation with First Parish Unitarian Universalist Church in Beverly.

Patti will be remembered most for her love of family and her kind heart—those who were honored to know her know that her generous spirit drove her to reach out to anyone in need; she touched many lives and will be deeply missed.

Patti was adamant about not wanting a funeral; her family is preparing a Celebration of Life in her memory. The celebration will be held on Sunday, January 8th from 1:00 – 5:00 p.m. at the Italian Community Center, 302 Rantoul Street, Beverly, with special remembrances and songs from 1:30-2:30.