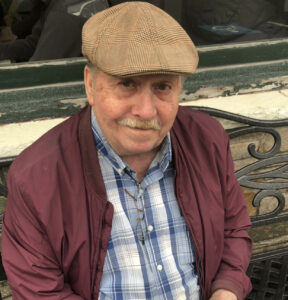 Paul Anderson Jr., known to many as “Buster”, passed away on December 12, 2020 at the age of 73. He
was a loving father, grandfather, brother, and friend.

Paul was born on July 30, 1947 in Boston, MA to Paul Anderson & Dorothy Anderson (Owen). He is
predeceased by his brother Stephen Anderson and his sister Mary Powers. He is survived by former wife
Teresa “Terry” (Flaherty) Anderson of Weymouth. His two children son Paul Anderson and wife Liza of
Weymouth, daughter Sharon Terrasi and her husband Bruno of Weymouth. Four granddaughters;
Jordan Anderson of Plainville, Kelsey Brennan of Somerville, Breanna and Makayla Brennan of
Weymouth. One Great-grandson Connor Ludwig. His sisters, Pauline Jaynes and husband Ronald of
Weymouth, Kathleen Mainieri and partner Larry Scott of Weymouth, Susan O’Brien of Brockton, Donna
Zacchine of Quincy and many nieces and nephews.

Paul grew up in Boston, MA. He worked as a painter for Boston City Hospital for many years. He was a
hard-working, caring man and he was always available to help someone in need. Music, movies, and
media were always major interests of his. When he was younger, he went to school for radio and
television repair. He enjoyed creating mixtapes, making home movies, and creating photo albums on his
computer. Most of all, he loved watching and talking about different movies. His family always joked
that whenever you called him, he was always “watching a movie”.

Paul loved his family more than anything. He lived in Somerville, MA for many years and served as a live-
in caretaker for his former brother-in-law Kenneth “Kenny” Flaherty for over thirty- five years. In 2010,
he moved to Weymouth, MA to be closer to his children, grandchildren, and sisters whom he visited
frequently. They will fondly remember his big hugs/kisses and getting spontaneous phone calls from
him just to say “I love you”. He enjoyed going on family trips to New Hampshire, Disney World, and
cruises. He also loved going out to breakfast with his grand-daughters and playing with his daughter’s
two boxer dogs “Sam” and “Bella” in the back yard. Paul will be greatly missed by all who knew and
loved him.

Due to Covid restrictions a small service for family and friends will be held for Paul on Monday
December 21 st from 9 to 11 A.M. at Boston Cremation 116 Franklin Street in Quincy.