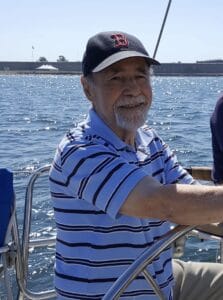 Paul Joseph Cormier, a resident of Natick, MA for 64 years, passed away peacefully on March 5, 2022, surrounded by his loving family in his final days. He was 90 years old.

Paul was born the oldest of six children in Jamaica Plain, MA, to Jeanne (Boutin) Cormier and Maurice Cormier. He graduated from Our Lady Help of Christian’s High School in Newton, MA. He earned a degree in Drafting Engineering from Wentworth Institute, and worked as a Construction Engineer on many local buildings in the Boston area. On the many drives throughout Boston with his family, he would proudly point out his work.

He bravely served in a combat infantry unit during the Korean conflict, earning the rank of Sergeant First Class before being awarded an honorable discharge upon his completion of service.

He, and his wife Dolores, enjoyed listening to classical music and reading. A deeply religious man, he was active in his local church as the first appointed lector as well as participating in other activities. However, his favorite pastime was sailing which he enjoyed with several family members, any chance he could.

He is survived by his loving wife Dolores (Manzelli) Cormier, to whom he was married for 64 years, and his seven children and their spouses: Michelle Cormier, Cathie Bomba, Raymond Cormier and Anne (Ruderman) Cormier, Greg Cormier, Jeanne Cormier Hamano and Thomas Hamano, Paula Cormier, and Matthew Cormier and Lisa (Hopkins) Cormier. Paul was the proud Grandfather to 11 and Great-Grandfather to 5 who all loved him deeply. In addition he is survived by his 5 siblings: Vivian Akillian, Raymond Cormier, Lorraine Malcolm, Annette Lockhart, and Jeanne Butler, several brothers and sisters-in-law, countless nieces, nephews, and extended family.

Paul will be buried in a private ceremony. A gathering to celebrate his life will take place later in the year.