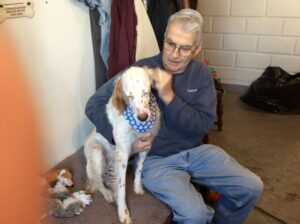 REVERE – Paul Leon Sarty, 77, passed away peacefully on November 14, 2017, after a long battle with a blood disease.

Paul was born in Everett MA., and is the son of Leander and Elizabeth (Mangan) Sarty. He is survived by his only brother Don. He grew up in the family home in Revere and was graduated from the Revere school system. After graduation he joined the Air force and spent four years in Europe. Upon returning home, he used his Air Force experience working for Eastern Airlines and Logan Airport in a variety of capacities. Paul was an avid motorcycle rider and owned many motorcycles. He was known to hop on his motorcycle and visit his friends, locally and across the country, touring most, 33, of the Northern states. He loved dogs and always had a dog in his life. He was especially fond of Jennifer, his present dog.