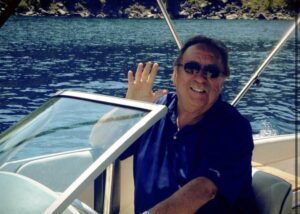 Paul Stanley Stevens passed away peacefully in his sleep on December 12th at the age of 79.

Raised in Marblehead by his parents Stanley and Angelyn Stevens, Paul truly “grew up” in a small camp off of Fort Beach in the same town where he spent his summers raising an orphaned seagull, sailing, and helping out at Penni’s. As a young man he had dreams of going to business school, a dream that he fulfilled at Burnett College with a degree in Marketing. This eventually led him to jobs at Wang, IBM and Prodigy, and eventually into the world of real estate where he opened Paul Stevens Realtors in his beloved hometown.

Paul called himself “a happy Aquarian”, which was recognized by anyone that knew him and his love of being on the water. From a young man racing sailboats and fishing, to a family man taking his kids on his famous “harbor burns”, to a man in his golden years who just enjoyed being able to “sit out on the boat”. Paul was also able to enjoy a great amount of time at a family camp in northern Maine, where he was famous for providing great food, drink, and laughter.

Paul was a lover of all things that spice up life and his personality would shine when he could get his hands on a microphone. He will be lovingly remembered for his prowess in the kitchen, a man always up for a good time, an even better laugh, enjoyment of dinners with his “three beautiful girls”, and enthusiasm for being an Emcee.

Paul is survived by his three daughters Jessica and her husband John Shea and their daughter Jasmine of Missoula, MT; Christina and her husband Garth Alling, and their children Quincy and Thatcher of Zephyr Cove, NV; and his daughter Elizabeth Stevens of Beverly, MA.

A memorial service will be held at Waterside Cemetery at 1:00pm on February 12th 2022, which would have been Paul’s 80th birthday. This will be immediately followed by a celebration of Paul’s life at one of his favorite local establishments. All are welcome.

In lieu of flowers, please consider donating to Greater Lynn Senior Services who have been immensely helpful to the family.

“Just remember, it’s only a movie.”-PSS