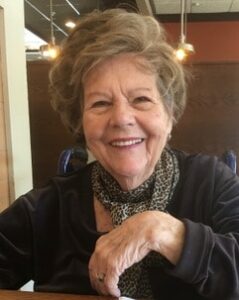 Paula passed away peacefully on Nov, 3 2020. Born Sep 23, 1936 in Framingham Ma. To Alfred
B Capone and Alice E. Sherman Capone. Preceding in death of her sister Jeannie Leonardi. Paula
was a graduate of Milford Highschool. She was the mother of Robert J Julian, Peter S Julian and
Tara M Julian. The grandmother of Robert Jared Julian and the wife of the late Robert P Julian
(Bobby) of Milford.

After having her children, she received her cosmetology license in Framingham Ma. She worked
several years in Natick at Wayne’s Beauty Salon. Paula always had a way with people and style.
Often spending many weekends with family in her kitchen trying new 80’s styles on them. Her
house was always filled with aromas of delicious homemade food as she was a wonderful cook.
Her love of cooking and people were certainly passed on to her children.
Paula later married James B Jones of Natick and resided there for a number of years; then
moved to Holliston alone across from the Fatima Shrine and became enlightened. Often, she
would lead faith gatherings with residents in her building creating a strong bond.

Paula spent the last 5 years of her life as a resident of Mary Ann Morse nursing home in Natick,
Ma. She touched so many people with her kind words and caring way, often found praying for
others and offering kind words of support. She was loved by many and will be missed more
than she could ever imagine.

The family asks to light a candle and say a few kind words in memory of Paula and how she may
have touched your heart.