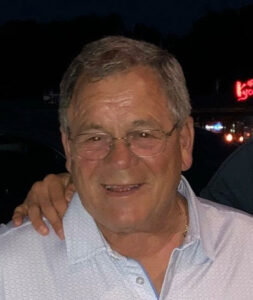 Peter DeGirolamo Jr. passed away Wednesday February 10, 2021 at Tufts Medical Center. Due to covid protocols, he was surrounded by no one #fCOVID #werenotbitter. Fortunately he was loved and supported by family and friends throughout his life.

Peter was born on July 11, 1942 son of Peter and Mary (Narciso) DeGirolamo Sr. He was a lifelong resident of Mansfield, a 1960 graduate from Mansfield High School and continued his education at Northeastern University.

For many years he was the owner of Peter DeGirolamo and Sons Inc., a company founded by his father Peter Sr. and now operated by his sons. He was a strong leader in business. He led by example and valued his long tenured employees. He took pride in his community and made countless contributions to it through the years.

An avid golfer, Peter was an active member of Highland and Foxborough Country Clubs. He was a fulltime sports enthusiast and supporter of MHS athletics. He loved watching his children, nieces/nephews, grandchildren and grandnephews play a myriad of sports. Of all the sports, football was by far his favorite. He was a proud member of the 1959 Class D Football Champions and one of the founding members of the Mansfield Pop Warner.

Visiting Hours will be at Boston Cremation (formerly Bolea) 115 North Main Street Mansfield Sunday February 14 from 1-4pm. A mass of Christian Burial will be celebrated at Saint Mary’s Church 330 Pratt Street Mansfield Monday February 15 at 11:30. Followed by interment at St. Mary’s Cemetery Mansfield. All attendees are required to wear masks and abide by social distancing guidelines. People unable to attend may view the funeral mass at https://www.mansfieldcableaccess.com/ then click on “public live” tab.