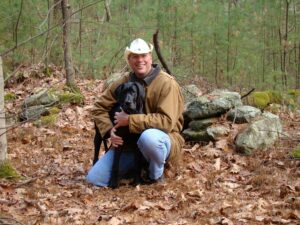 Peter Gerard Ginouves – a gentle, giant of a man – devoted husband and father, unexpectedly died at his home in Harvard, MA on June 22, 2015. He leaves an entire community in mourning.Peter was a force of nature. At 6’9”, his physicality made an impression, especially running on Harvard’s back roads with his Great Dane, Ruby, by his side. His friendly manner, quick wit, distinctive laugh, and kind heart, helped Peter make lasting friendships wherever he went. Peter knew how to have fun and was generous, almost to a fault. He amused his family and friends with his storytelling, dance moves, and his imitation of Dr. Seuss’ Grinch (which was true genius). He found adventure in sailing, biking, skiing, motorcycles, and traveling with his family. His athleticism and height made him a high school and college basketball star. Peter knew how to pack 36 hours into every day, multi-tasking to plan family gatherings, organize a fundraiser for the Bare Hill Rowing Association (he was a board member), and fulfill his professional obligations. He always thought big, evinced by his long and successful career in finance. His ideas were marked by true creativity, a keen intellect, attention to detail, and a profound integrity. Peter was born at home, on May 2, 1961 in Westfield, New Jersey. He graduated from Conard High School in West Hartford, CT, and earned his BS in accounting at Clark University in Worcester, Massachusetts. He completed his MBA in Finance at the University of Pittsburgh in only eleven months, where he was recruited by IBM before graduation. His career in finance started with IBM in Poughkeepsie, New York, then Burlington, Vermont and finally at IBM’s headquarters in Armonk, NY. Later he moved to Compaq in Houston, Texas.

He returned to the northeast, where he worked for Hewlett Packard, Computer Associates, EMC, and other smaller companies. He recently accepted his dream job, as Chief Financial Officer, at Altran North America / Foliage. Peter was predeceased by his mother, Valeska M. Ginouves (nee Hammer) and his eldest sister, Karla M. Ginouves. He is survived by his beloved wife of 26 years, Susan Ginouves (nee Poe); his two beautiful and amazing children, Sam Ginouves (currently attending the University of Wisconsin) and Michelle Rose Ginouves (currently attending the Bromfield School); his father, Albert G. Ginouves of Brooksville, FL; his sister Connie Swanzer and her husband Larry of Ringoes, NJ; his sister Michele Ginouves and her husband Hal Sweeney of Brooksville, FL; and by his brother, Albert P. Ginouves and his wife Amy Lake of Lakeville, CT.

His in-laws include Sue’s father and stepmother, William R. and Esther Poe of West Hartford, CT; her sister Christy Poe Colley and her husband John of Saratoga Springs, NY; her brother James Brinton Poe and his wife Karen of Sebastopol, California; her brother Jeffrey Scott Poe and his wife Lorri of Canton, CT; and her brother Andy and his wife Alivia of Amherst, MA. His many adoring nieces and nephews include Christopher and Kristen Olsen; Nataly, Ismael, and Sophie Lake-Ginouves; Stelle Poe; Kelsey and Taylor Poe; Grace and Lily Poe; Meghan and Moira Colley; his grandniece, Lyla Olsen and grandnephew, Gunnar Olsen. And last but not least, his dearest Ruby Roo, the great dane. Peter will be deeply missed by all. Services will be held in Harvard, Massachusetts at the Harvard Unitarian Universalist Church (www.uuharvard.org), Monday, June 29, at 11:00 AM. The family has requested that in lieu of flowers donations be made to Bare Hill Rowing Association Inc., in care of Jim Ware, 90 East Bare Hill Road, Harvard 01451, or to The Parmenter Foundation, 400 Boston Post Road, Suite 1A, Sudbury MA 01776 (508-358-3000 ext. 361).