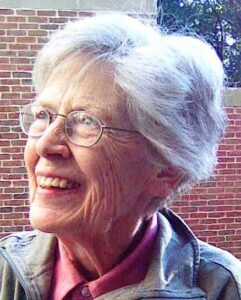 Phyllis was born in Cambridge, MA, on Feb. 1, 1926, to Ruth (Carley) and Robert B. Starbuck. She was raised in South Acton on a hilltop farm, where her love of gardening and cooking began. Phyllis attended Radcliffe College (class of 1947), where she studied economics and was a member of the varsity crew team. She also graduated from the Katharine Gibbs School. She was secretary to the dean at Amherst College and subsequently taught math at Northampton Commercial College. Phyllis and Donald E. Hastings met at a square dance in 1949 and were married in Amherst on July 4, 1950. She was active in the Amherst Woman’s Club, the Garden Club of Amherst, and the UMass women’s hiking group and was a Town Meeting member. She was a Brownie Scout and Cub Scout troop leader and a member of the First Congregational Church. Phyllis was an avid gardener and cook and was devoted to her husband and children, the family store (A.J. Hastings, Inc.), and the town and townspeople of Amherst. She methodically and successfully fought against the building of a parking garage behind CVS in the center of town. She and Don enjoyed traveling and regularly took the family on hiking, backpacking, and camping trips. Phyllis and Don also participated in many Amherst College alumni trips overseas. She was a familiar sight to many as she marched in her Keds sneakers along the streets of Amherst.

A memorial gathering to celebrate Phyllis’s life will be held on Sunday, Dec. 4, from 1 to 3 p.m., at the Lord Jeffery Inn in Amherst. In lieu of flowers, donations may be made to the Woman’s Club of Amherst, 35 Triangle St., Amherst, MA 01002, or to the Jones Library, 43 Amity St., Amherst, MA 01002 or at http://www.joneslibrary.org/182/Donate, in honor of Phyllis S. Hastings.