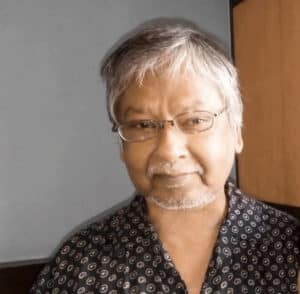 Ravi Prasad Khanna passed away peacefully on September 24, 2022 at Brigham and Women’s Hospital while surrounded by family. Ravi is survived by his wife Shirley; five children, Anjali, Shyam, Asha, Quinn, and Priya; six grandchildren; and his sisters Alka, Shobha, and Pratima.

Ravi was born in 1953 in Lucknow, India, to SukdevPrasad and Savitri Devi Khanna. He was raised in Benaras, where he attended Sherwood College. He worked briefly at a restaurant in Sarnath before leaving home to travel around India and Nepal. This led him to becoming a translator for the spiritual teacher Neem KaroliBaba, also known as Maharajji, in the early 1970s. The Maharajji’s instruction to “love everyone and feed everyone” would chart the course for Ravi’s life.

In 1977, Ravi moved to the United States at the age of 23, settling down first in Cambridge, Massachusetts. There he was the shipping manager at Illuminations, Inc, where he was known to coworkers as “the best manager ever.” He moved to Ann Arbor, Michigan, to work as the outreach coordinator at the Seva Foundation, which worked to eradicate blindness in India and Nepal. Then, at Oxfam America, he was then the information coordinator for famine relief in Africa. While at Oxfam, he also organized a campaign to deliver agricultural supplies to Nicaragua during the US embargo that followed the revolution there. He settled down in Amherst, Massachusetts in 1989, before returning to the Boston-area in the 2010s.

Ravi worked, consulted, and served on boards of a number of progressive organizations, including the Peace Development Fund, Haymarket People’s Fund, 1world communication, Grassroots International, PHENOM, Resist, and Solidaire. He founded a news and opinion website foregrounding the perspectives of activists in the global south. He also produced documentaries on child labor in India, the war on drugs in Colombia, and the water wars in Bolivia.

Ravi lived many lives and left a mark on nearly everyone he met. He will be remembered as a proud father and grandfather, a committed activist, and an exceptional cook who loved to feed people. He was generous, perhaps to a fault, and was unable to pass judgment on others. He traveled widely but also remained curious about the world.

There are perhaps no more fitting words of tribute to Ravi than his own. He described his life as “the story of my many lifetimes of adventures, experiences, moments of pure joy.”

There is a mischievous little boy, always getting into trouble, being punished, getting

into trouble again. It seemed everything I thought was fun was trouble. A scared young boy, living on the streets in India. Mistreated and abused. Angry, and mistrusting of the world. The young man on a spiritual journey. Saved by a spiritual teacher, my guru. Who taught me to trust and love again and to serve. Moving to the U.S…. it didn’t take long to realize I had moved into the belly of the beast; rapidly devouring all life on earth. I had a new purpose – an educator, an organizer, an activist, a traveler, a storyteller, a documentary maker. I feel like I have lived several lifetimes in my 68 years….

I am now an elder in my family. The oldest, after the passing of my parents and two older siblings. I am a husband, a father, a nana (maternal grandfather), a mama (maternal uncle), chacha (paternal uncle). The elder of a big family here in the U.S., and in India.

“There is no heaven; this is it, we need to make this a heaven for everyone’ and

‘Service is the highest form of spirituality.”

Ravi’s legacy will live on in our hearts and in the work that was so dear to him – service in order to make this world a heaven for everyone.