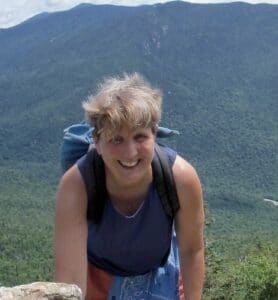 She is survived by her three brothers, Tim, Dan, and Sam Hoffman, and six nieces and a nephew. She was predeceased by her parents, Curtis Hoffman and Anne (Henry) Andrews and youngest brother Nathan.

Beka was born in Reading PA. As an infant she lived in Virginia, then in Hopewell, NJ during elementary school years and in New Britain, CT as a teenager and was in the high school marching band as a saxophonist. After high school, she studied at the University of Chicago. Beka settled in Hopkinton, MA in 1989 where she lived until her passing.

Beka was introduced to camping and hiking as a child and enjoyed the wilderness the rest of her life. Even near the end, Beka bought a newer van and loaded it up with her camping gear, ready to go, but did not get the chance. She never gave up hope for the future.

Beka was a strong, independent woman whose friendship was valued by many. She cared deeply about social justice and caring for nature and took actions to affect both. Beka had a strong commitment to promote feminist causes and also lived spiritually which was felt by all who loved her. Beka was an avid reader and had an intensely inquisitive mind, always exploring and investigating her heartfelt interests. She was a drummer for over 20 years.

Beka had several vocations before finding that teaching was her passion, and she worked as a teacher for the later part of her life.

At the time of her death, Beka served as Chairman of the Board of Commissioners of the Hopkinton Housing Authority.

Beka requested that any donations in her memory be made to these organizations which were important to her and which she supported:

We Want The Land Collective https://wwtlc.org/