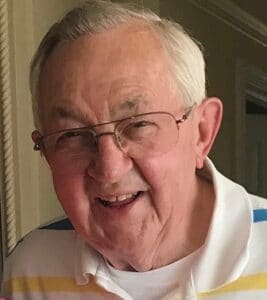 Reinhart Billie Billiar (Bill), age 85, died peacefully in his sleep on February 16, 2022 near his son’s home in Worcester, MA. He is survived by his daughter Chandra, his son Kris, his grandchildren Annika, Marcus, Eleonor, Lucy, Simone, and Naziah, his brother Robert Billiar, and his sister Georgia Deming.

He was born on July 2, 1936 in Crete, Nebraska, the sixth child of George Billiar and Tillie (Sipek) Ahl. Bill was awarded a scholarship from the Ralston Purina Company towards his bachelor’s degree in Feed Sciences from Kansas State University and went on to receive his PhD in Biochemistry from The University of Utah. From there he moved to Cambridge, MA to work as a postdoctoral scholar at Harvard Medical School and at Woods Hole in the summers.

He met his former wife Joanne Brungard there, and they married in Boston in 1966. They started their family in Cleveland, OH where he was an assistant professor in the School of Medicine at Western Reserve University. Bill continued his research in reproductive endocrinology as a full professor at McGill University in Montreal from 1984 to 1996, then moved to Virginia Beach to join his friend and colleague Dr. Gerald Pepe at Eastern Virginia Medical School. His colleagues considered him an innovative researcher, always ahead of his time, and his students lauded him as an amazing and caring mentor. He retired in 2008.

Bill loved spending time with his children and grandchildren, caring for his dogs, playing golf, telling stories, watching movies, listening to classic country music, and toasting life over martinis with his friends.

Bill asked that no funeral be held. In lieu of flowers, a donation to Planned Parenthood or the ASPCA would honor his memory.