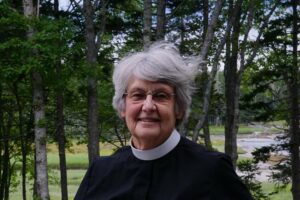 Reverend Dr. Virginia “Ginny” A. Peacock, 79, of Stonington, ME, died on February 22, 2021, at the Rose
Monahan Hospice in Worcester, MA, after a multi-year struggle with lung cancer. Ginny was born in
Chicago, IL, to Daurie Vance and Maryella (Cowles) Peacock. She grew up in Oak Park. She earned her
undergraduate degree at University of Michigan, where she met and married John H. Martin. They had
two children; Elizabeth and Deborah.
Following a divorce in 1975, Ginny earned her Master of Divinity (1977) from Episcopal Divinity School in
Cambridge, MA. She then engaged in doctoral studies at the Toronto School of Theology. She earned her
PhD from St. Michael’s College, University of Toronto in 1987. With her abiding love of church and
service Ginny was ordained during the early wave of female Episcopal Priests, by her home Diocesan
Bishop, Colman McGehee Jr., of Michigan. In her lifetime, Ginny served in parishes and university
communities in Toronto, ON; Ann Arbor, MI; the diocese of Northern Michigan, and Deer Isle, ME.
Ginny was predeceased by her father, mother, and older brother, Vance. She is survived by her loving
daughters Elizabeth of Cambridge, ON, and Deborah of Worcester, MA; her sons-in-law Edward and
Dan; her grandchildren Christopher, Timothy, William, and Rebecca Martin-Chan, Naomi and Isaac
Shertzer; and countless friends, especially in Toronto, the U.P. of Michigan, and her Deer Isle
community.
Ginny was deeply reflective, and loved to read philosophy and religious ethics. She deeply believed in
love and community and sought in her ministries to integrate deep philosophical and ethical questions
around existence into practical, meaningful approaches to living life. She was a wonderful listener and
could disarm with her thoughtful open-mindedness. She was fierce about her friendships and social
justice, and called herself and others to witness with honesty, kindness, and integrity.
Her body has been cremated and there will be a private service for family and close friends.