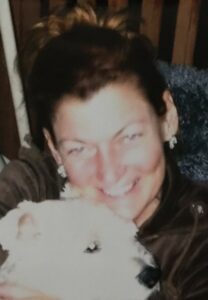 Rhonda Dickerson Powers, 50, on March 19, 2016. She was the beloved wife of Robert Powers, stepmother of Robert Powers III and Cameron Powers, daughter of Janet and Bob Dickerson, sister of Robin Bell, and Bobby and Rochelle Dickerson, daughter-in-law of Robert and Nancy Powers, sister-in-law of Jan Bell, Michael and Stephanie Powers, Stephen and Derek Powers, Michelle and David Rao, and Kristyn and Michael O’Connor, and aunt of Maxwell, Riley, Liam, Donovan, and Lillian. Rhonda was an amazing hairdresser and loved lipstick, shoes, eyeglasses, black-and-white movies, vacations, taking pictures, and making crazy videos. She was a fabulous cook and had an infectious smile and the greatest legs. She had a very special bond with her two dogs, Austin and Stella. A service will be held Tuesday, March 29 at 11am at Boston Cremation, 287 Main St., Malden. Friends and family will visit from 10am until the time of the service. All are invited to a luncheon afterward at the Moose Lodge in Malden at 562 Broadway. To leave a condolence or share a memory, please click below.