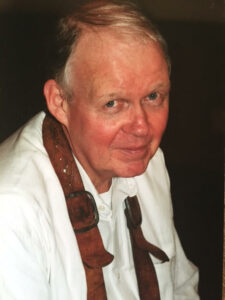 Richard Austin Maloney passed away quietly on October 2nd, 2016, surrounded by his loving wife of 50 years and his 4 daughters.

Rick’s greatest love in life was his family and spending time with them especially at his beloved home at Goose Rocks Beach. He spent countless hours reading his many, many, books, walking daily with his wife, sharing great food and cocktails, and taking a catnap just about anywhere. Throughout the last years that his disease took over his mind and body he never complained. He continued to take walks with Alice and although he became increasingly quieter in the last months, he continued to surround himself with his family in his home, and never lost his ability to inject his superb vocabulary, gained from his avid reading, into a conversation.

Richard was a 1967 graduate of Northeastern University and during his time there he began working for the bookstore. After graduating he began his 30+ year career managing the college bookstores at Northeastern University, Tufts and Bentley. After retiring from his position with Barnes and Noble, he moved onto his second career and worked for, what else, but a fantastic small book store in Winchester!

Rick is survived by his wife Alice Maloney of Malden, his children Katherine and Donald Toothaker of Bradford, Elizabeth and Michael Brennan of Cambridge, Carolyn and Edward Hagan of Topsfield, Antonia Maloney of Malden, his sister Joanne Margeson of Georgetown ,her husband Charles and their children, Holly and Ralph Gamache, Victoria and Jeffrey Hyer, and their children Spencer, Delaney, Austin, and Declan.

Rick was also blessed with 5 grandchildren, Demsey, Daniel, Patrick, Hope and Eve, whom he adored and showered with love…and books!

A service of memory will be held on Sunday October 9th at 2:00 at the First United Methodist Church at 645 Main St. in Melrose Ma. In lieu of flowers, please consider a children’s book donation to: Reach Out and Read at Childrenshospital.org.