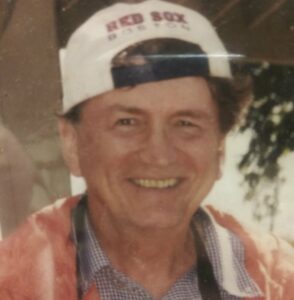 Richard Daniel Callahan, 80, of Boston, MA died peacefully on August 7, 2020, while under the care of
the Seasons Hospice House in Milton, MA. Richard left this physical world at approximately 2:30PM
while surrounded by the love of his family and friends.
Richard, also known as Dick, was a man who could not be forgotten. His entire being cannot be
captured in a single obituary as he was multidimensional in every sense of the word, but our hope is that
this account can capture an accurate depiction of the man whom we like to refer to as “the best man in
the world.”

Dick was born on August 4, 1940 in Boston, MA to parents Francis Daniel Callahan and Gladys Mary
Felton. Dick was the 2 nd child in a family of six siblings, which include Sheila, Helen, Robert, Philip and
Daniel. He was given up to the state of Massachusetts at a young age due to his mother suffering from
untreated mental illness and was placed in countless foster homes until he was 18 years old. He went
on to join the Air Force from 1958-1962.

Dick had a fervor for education, and, after honorably discharging from the military, he went on to
receive his Bachelor’s Degree in Mathematics at UMass Amherst, Master’s Degree in Early Childhood
Education from UMass Boston, Computer Science certificate from Harvard Extension School, and a
certificate in Paralegal Studies and Occupational Counseling from Northeastern University. His
excitement for education was coupled with his passion for reading, taking a special interest in world
history. You could typically encounter Dick with a big book in his hand, reading quietly and going on
about how literature would let his imagination run wild and take him to a special place. Many a person
have been known to say that he was one of the most brilliant men they had ever met. He quoted
Shakespeare often &amp; was able to recite word-for-word some of his most famous plays. He idolized
Abraham Lincoln, and greatly admired the American writers, Mark Twain and Edgar Allen Poe, as well as
the Indian philosopher Swami Ramdas. Dick was a passionate believer in the Buddhist lifestyle, as well
as Catholicism. He had a love for writing short stories and poetry. He was also a “Mr. Fix It” and he was
able to repair anything you put in front of him, and usually wound up putting the object back together
even better than its original condition. He was a builder, inventor, philosopher and perfectionist, taking
much pride in absolutely anything that he put his mind to. For Dick, a good job was always worth doing.

Dick was a gentle giant, standing 6’2 at 230lbs, priding himself on his great stature while keeping in mind
his love for all things small. If the saying “wouldn’t hurt a fly” rang true for anyone, it would most
certainly be for Dick. To say that he was kind and compassionate would be an understatement. Dick
was reliable and punctual, and it made him feel good to show up for other people. If he said he was
going to do something, you would not have to wonder if he would follow through. He was undeniably
loyal, and one of his favorite things to say to the people that he loved was, “Remember, I got your back,
and I am always in your corner.”

Dick loved the outdoors, and around the age of 12, he was placed in a foster home in New Hampshire
that was centered on a large farm. He spent a couple of years there, working in the fields and taking
care of the animals. He used to say that his reward for a hard day’s work was an ice cold beer. “I only
had one, but boy, did it taste good.” As an adult, he spent many an enjoyable day outside with his dogs,
Riley and Ronan, hiking the Blue Hills in Canton, trudging up Peter’s Hill of the Arnold Arboretum in
Boston, and walking at Jamaica Pond in Jamaica Plain and Millennium Park in West Roxbury. Walking
with his animals was his happy place. He looked forward to waking up his young daughter in the early
hours of the morning to take her to Larz Anderson Park to catch the sunrise. He would pack a blanket and hot chocolate, and Emma would fall back asleep in his arms once the sun had risen. He loved to sit on his hammock in his back yard and watch the clouds with his grand-daughter, Grace. “See that cloud
there, Grace. That is a beautiful cloud, and I am giving that cloud to you, my dear.” He loved to teach
people the precious connection between humans and the beauties of the Universe, such as the sun, the
moon, the clouds, or a gentle breeze, adding that we are all one in the same and created from the same
Source, therefore, everyone and everything are forever entwined.

Dick used to say that he didn’t start living life fully until his only child, Emma, came along in 1987. On
the day Emma was born, he said to his then wife, Kathy, “I don’t know what I did to deserve such a
beautiful thing.” Out of all his accomplishments, Dick would always say that being Emma’s father was
his most rewarding. He would take her everywhere and expose her to everything educational so that
“her little brain could start making connections.” When Emma was little, she once asked, “Daddy, why is
the sky blue?” The very next morning, she found a book on her bed that explained exactly why the sky
was blue. Dick made sure that all of Emma’s questions about life were answered as best as he could,
especially when it was something that a book could better explain, as he wanted her to be an avid
reader like himself. Dick had a passion for sophisticated vocabulary, and in talking with him, you’d often
need a Merriam-Webster encyclopedia to decipher exactly what he was trying to say – just par for the
course for this brilliant mind. It was important to him that Emma acquire this gift, so when she was very
young, he would start each morning with a word-of-the-day to help her with her language skills. Dick’s love for Emma was matched by his love for his only grandchild, Grace. He used to say he thought he could not love another like he did Emma, but he was admittedly mistaken. Dick’s world expanded to
even greater heights as he took on the role of “Grampi.” It was important for him to teach “his girls”
about the things that money cannot buy, such as the meaning of family (no matter how small), loyalty,
forgiveness and never going to sleep without saying “I love you.” Dick made sure that Emma and Grace
knew that humor can pull you through the darkest of days, and that “pain is only temporary.” We will
never forget the sound of his contagious, hyena-like laughter, or the feel of his big, tight hugs, ones that
made you feel his love so deeply. He made sure that his girls knew the soul is the core of our existence
and it carries on infinitely after passing, so we will always be together as a family, just in a different
form. I don’t think there could have been a better father or grandfather than Dick. In our eyes, he is
unparalleled.

Emma Callahan and Grace Bohan would like to extend a warm, gracious thank-you to the staff at
Standish Village Assisted Living in Dorchester, MA, where Dick spent the last 9 months of his life. We are
forever grateful for their care and kindness. We would also like to thank the care team at Milton
Hospital, the Seasons Hospice House, and the staff at Compass Medical, including Dr. Deborah O’Keefe,
whose kindness was unmatched. Thank you to Emily at Boston Cremation, who has made this process
bearable. Thank you to Kathy Callahan, whom Dick still loved very much, in his own way. Thank you to
the friends that Dick made at different points in his life, including Jack Ross, Wellington Mtshali,
Matthew Zion, Warren Boucher, John Pedini, Helmut Stein, Jordan from Ethos, and Dora Kalajian. A
special thank you to one of Dick’s best friends, Peter Guild – you are incredibly special to us. Thank you
to our neighbors in Roslindale who kept a loving, watchful eye on Dick as he started to decline, including
Jan, Neil, Mike and Jeannie. Thank you to Dick’s great-nephew, Eric Boucher, and his family, Monica,
Sebastian, Alana and Savannah. They were there at the drop of a dime for Dick, providing him with an
abundance of love and security. We are forever grateful for each of you. Thank you to Dick’s younger
brother, Bob Callahan, who was most helpful and kind. He showed Dick what it was to have a relationship with a brother, which meant the world to him. Thank you to Phil, Helen, Amy, Sheila,Danny, and Linda. Thank you to the O’Connell, Bohan and Glavin families. Denise, thank you for every
homecooked meal you sent to Dick. He enjoyed every bite. To anyone we may have missed, please
know we are most appreciative of your kindness and support.

Dick’s funeral mass will be held on Saturday, August 29, 2020 at 10AM in the upper church of Sacred
Heart Parish at 169 Cummins Highway, Roslindale, MA, 02131. At this time, there is no burial. All are
welcome to attend. Please bring a mask.

In lieu of flowers, please consider performing a random act of kindness for someone in memory of Dick.