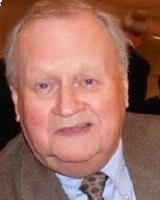 Richard F. “Dick” Cotter, 88, of Melrose, MA, passed away on August 12, 2015. Son of the late Bartholomew and Nora (Crowley) Cotter, Mr. Cotter was born and raised in Wakefield, the youngest of seven children. He graduated from Wakefield High School in 1944 and was a World War II Navy veteran. He worked in the telecommunications industry for fifty years, for the New England Telephone Company and the Commonwealth of Massachusetts. He is survived by his cherished long-term partner, Nancy L. McLellan. He was the loving father of five children: Marie (John) Doyle of Mount Desert, Maine; Richard Cotter of North Reading; Gerald (Anastasia) Cotter of Stoughton; Eileen (William) Fratangelo of Moon Township, PA, and Timothy Cotter of Wakefield. He leaves nine grandchildren and four great-grandchildren. Mr. Cotter was the former husband of the late Norma (Whitney) Cotter. Predeceased by brothers John and James Cotter and sisters Mary Cotter, Agnes Zingarella, Elizabeth Dillon and Frances Staniloff, he also leaves several nieces and nephews and many close friends. An avid sports fan, Mr. Cotter also spent time on DIY projects, organized reunions for his extended family, and read science nonfiction, such as books by Chet Raymo and Neil deGrasse Tyson. He also coached Little League baseball in Wakefield for many years. He enjoyed his camp on the shore of Morrill Pond in Hartland, Maine for 25 years. For over 60 years he was a member of the Wakefield Elks. Family and friends will gather at the Knights of Columbus 570 North Ave., Wakefield to remember and celebrate Dick’s life on October 18 from 4-8pm. Memorial contributions in his name may be made to the Frances Cotter Staniloff Scholarship Fund, TSF of Wakefield, Inc. PO Box 321 Wakefield MA 01880. To leave a message of condolence please click below.