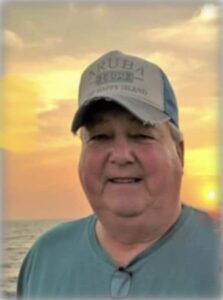 Richard ‘Hap’ Curtis, loving husband and father, passed away at Good Samaritan Hospital on
Monday, January 25, at the age of 65.

Born in Bristol, Connecticut on October 23, 1955 he was the son of Roy and Jennie Curtis. He spent
summers as a child in Belfast, ME and grew up in Mansfield, MA. He graduated from Mansfield High
School class of ’73. His love of animals and inability to say no resulted in owning several pets over
the years, his dog Lucy was his favorite.

Many people only know him as ‘Hap’, his childhood nickname from the days of little league baseball.
He loved all the Boston sport teams, especially the Patriots, Red Sox and Celtics. He was honored to
share his favorite beverage Miller Lite with Kevin McHale while on a “ Cruise with the Celtics” that he
and his wife took. His favorite vacation spot was spending time in Aruba with friends playing BINGO
and relaxing.

Richard was a mechanical engineer at the former Foxboro Company, now Schneider Electric, for over
30 years. He also worked as a reserve police officer for the Town of Mansfield. It was a job that he
was proud to do. He loved working details at the Xfinity Center and Gillette Stadium.
Hap is survived by his beloved wife of 42 years, Barbara (Spiezio) Curtis, and his son Joshua. He is
survived by his sister, Brenda Kaufman, nieces Jennifer and Georgia, nephew Matthew and
sister/brother-in laws Diane and Arthur O’Neill. He is predeceased in death by his father, Roy, his
mother, Jennie, brother-in-law Ron Kaufman and nephew Adam Kaufman.

A graveside service at St. Mary’s Cemetery in Mansfield will be held Saturday, February 6th at
12:30pm. COVID restrictions apply.