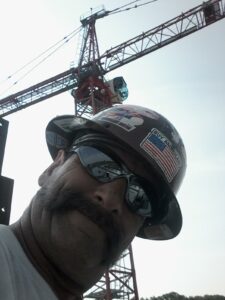 Richard L Brooks Jr. age 62, of West Bridgewater Mass, died peacefully on Thursday morning March 24th, 2022 at home surrounded by love. Richie had a brief, but courageous battle with cancer. He was born in Boston and grew up in East bridgewater. The loving son to Richard Brooks Sr. and to the late Ethel May Brooks.

Richard was the beloved husband of Donna Brooks, and the devoted father to Julie Brooks, Kelsey Baker- Brooks and her wife Tama. The loving grandfather of his cherished Maeve. He is also survived by his siblings: Gina and Ron Cotter, Laura Brooks, Michael Brooks, Thomas and Joan Brooks, and the late Margaret Parks. He was a fun, loving uncle to his nieces and nephews. Richie also leaves behind many dear friends, one of which was the late Scotty Perkins.

Richard worked with iron his whole life. He put his heart and soul into it, from a boy in his fathers shop – to the tallest buildings of Boston. He was a proud member of Iron Workers Local 7 until 2019 when he retired. He helped to construct many buildings around Boston including Brigham and Women’s Hospital, Natick Mall, and Gillette Stadium to name a few. In his retirement he was a proud business owner of olde english iron, where he crafted quality American made railings. He was a true MacGyver who could fix anything. Richie loved riding his 1988 Harley Davidson Heritage Softail, the Patriots, fishing, and classic rock music. He was a very warm, welcoming person and a big goof. He loved his girls.