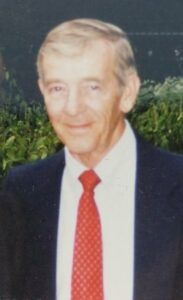 Ryan, Richard R. “Dickie” 86, of Hyde Park, died Tuesday, July 30, 2019, with his loving family by
his side. He was born on March 25, 1933. He was the beloved husband of Nancy
Ryan of Hyde Park. He was the son of the late Charles and Helen (O’Day) Ryan of
Somerville. He was the loving father of Richard Ryan of Hyde Park, Michael Ryan
and his wife Carolyn of Henderson, Nevada, Marie Ryan of Quincy and Charles
Ryan of Braintree.
He was the loving grandfather of Jamie, Jessica, Jenna, Shauna, Wyatt, Matthew,
Waylon and Joseph. He was the loving great grandfather of Will.
Brother of Virginia Barnes, and Thomas, James, Stephen and William Ryan and the
late Patricia Robinson, Jean Doughty, and Charles, John, and Kenneth Ryan.
Dick was happily married to the love of his life Nancy for 62 years. He loved being
with his family and friends. He was a wonderful dad to his kids and a wonderful
grandfather to his grandchildren. He especially loved eating dinner at his daughter
Marie’s house. He loved horseracing and was a great pool player in his younger
days. He was a member of the Sunset Bocce Club in Readville. Dick was an
Electrician at the MBTA and he retired in 1995. He was a proud member of the
IBEW Local 103. Since his retirement he enjoyed spending winters in Boynton
Beach, Florida with his family and friends.
We were so very lucky to have him as a husband, father and grandfather! He was
the best! Everyone that knew him loved him! He will be dearly missed! He will live
on in our hearts forever!
A Memorial Visitation will be held on Friday, August 9, 2019, from 10:00am to
11:00am followed by a Memorial Mass at 11:00am at St. Anne’s Church, 90 West Milton St. Hyde Park.