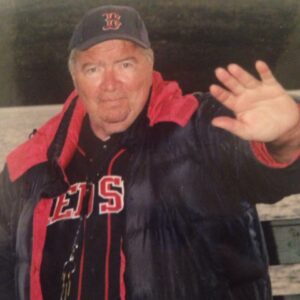 Robert (Bob) Aufiero died peacefully on Wednesday February 17, 2016 at Golden Living Center in Melrose MA at age 64. Born in Revere MA, Bob attended Revere Public Schools and graduated from Revere High School in 1970. He was a kind person who was described by those who loved him most as someone who loved life, loved to laugh, loved jokes, and was an affable person. He met his wife Lois and the two were married in 1983. They had three children, Robert Aufiero Jr., Rev. David Aufiero, and Alex Aufiero. Bob was a very faith filled man, who was baptized Catholic and loved God very much. His faith was very important to him. Not only was he a communicant at St. Anthony’s Parish, but he also attended functions at First Congregational Church in Revere where he enjoyed friendship with Pastor Nicholas Granitsas for forty years. In addition to keeping good friends, he was a good family man. Bob was a hard worker as a cab driver and did all he could to provide for his family. In his spare time, he enjoyed retreats, loved nature, loved the sun-rise and the outdoors. He was a terrific athlete, an avid Red Sox and Celtics fan. Although his last days were of great suffering, the family is comforted by the fact that he is in a better place. Bob leaves behind his wife Lois of 33 years, his children, Robert Aufiero Jr., Rev. David Aufiero and Alex Aufiero. His brother Joseph Aufiero, and sister Linda Aufiero. Sister in Law Eileen, and nephews Joseph, Ronnie, Richie, Jason, Tommy, their families and friends. Those who have known him loved him and will miss him. A Mass with Christian Burial will take place on Wednesday February 24, 2016 at 10am in St. Anthony’s Church. His son Rev. David Aufiero has the privilege of being the main celebrant for the Mass. There will be a burial following at Woodlawn Cemetery, with no calling hours.