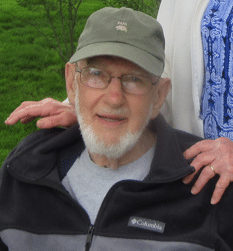 Robert (Bob) Carl Webber of Mansfield, 86 years, Korean War Veteran, peacefully passed away
in his home in Mansfield, MA on Wednesday, April 20, 2022, with his loving wife by his side.

He was the beloved husband of Elsie (Bonnie) (Rowell) Webber for over 61 years. Loving father
of Robert (David) and his wife Ruth (Cushman), Carl and his wife Susan (Sanders), Cynthia and
her husband Frank Svoboda, Daniel, and his companion Jayne Nordbeck-Dollivar, and
Catherine. Caring Grandpa or Papa to his grandchildren Michael, Michelle, Nicole, Andrew,
Jonathan, Gabrielle, Julianne, and Vanessa. He is also survived by his sisters: Joan and her
husband Trevor Heaver of Vancouver, BC and Doris Menslage of Rockland, MA and his six
great-grandsons: Lucas, Nathan, Riley, Parker, Clinton, and Weston, and many nieces and
nephews.

He is predeceased by his first wife Barbara (Guildford), his brother John Kenneth (Ken) Webber,
and his parents, John and Georgie (Washburn) Webber.

Robert was born in Somerville, MA on August 4, 1935. His parents lived in Somerville, then
Everett, before settling in Rockland, MA where he attended school. When he was twelve years
old, he had a large paper route. Robert served in the U.S. Navy from 1953-1957 working in the
boiler room of the USS Fulton, a submarine tender, out of New London, CT. After his active
years of service, he worked for a company that further developed the Plymouth Municipal
Airport. Robert worked for several] companies including Washburn Tire, CE Hall & Sons’
Trucking, Mansfield Tire, and Webber Electric Services. Robert took great pride in his family,
his home, and his vehicles. For a few years he was a member of the Elks’ Lodge in North
Attleboro. He enjoyed being on a North Attleboro bowling league, fishing, including ice fishing,
gardening, camping, and tinkering. He had a natural ability to fix things. In his retirement he
enjoyed building puzzles and using technology. His mind never dulled and was always crisp and
intelligent.

A private celebration of life will be held in his honor later.