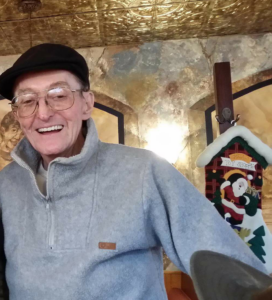 Robert Daniel Hoy, passed away Sunday, February 25, 2018 with his family by his side. He was born January 6, 1933 in Boston to James and Margaret (Nehall) Hoy. Robert graduated high school and went on to serve his country in the United States Navy aboard the Albany CA 123 the Flagship of the 6th Fleet during the Korean War. Mr. Hoy married his wife, Pauline (Levertue) Hoy and they raised their two boys Timothy and Paul. He worked for the United States Postal Service retiring from the South Boston Annex. He was a Eucharistic Minister his home Parish was Sacred Heart Church Malden Ma.

His son Timothy Hoy resided in The Boston Home in Dorchester before sucumbing to Multiple Sclerosis . During and after Timothys stay Mr. Hoy volunteered at the Home. He lead discussion groups using documentary videos he went to the Boston library to borrow for the stimulation of the residents. Mr. Hoy made the hour long commute at least once a week year round.

Robert issurvived by his son Paul Daniel who he loved with all his heart; many nieces and nephews including his niece Susan Brooks and her husband Thomas who will miss him very much. Robert was predeceased by the love of his life his wife Pauline and their son Timothy; his brothers John, Walter, Charles, James and William and his sisters Irene and Ruth.

All are invited to attend his funeral Mass on Wednesday, March 7, 2018 at 10:00am at Sacred Heart Church, 297 Main Street, Malden, MA with burial to follow in Holy Cross Cemetery, Malden. A visitation will be 8:30am to 9:30am the morning of the funeral at Boston Cremation, 287 Main Street, Malden.