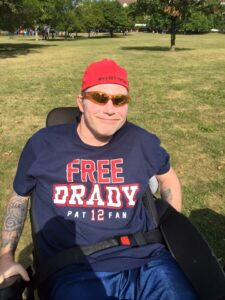 Resided in Saugus for 39 years and spent the last 6 years in Chelsea.

He sadly lost his long, courageous, hard-fought battle of a debilitating disease.

Rob was the son of the late Robert and Louise (Gauthier) Schriefer of Salem, NH and Sandra Ryan Schriefer of Lynn. He is survived by his sister Danielle (Schriefer) and brother-in-law Stephen Ventre of Lynnfield and sister Robin (Schriefer) MacLennan of Indiana. Step-siblings, Pam (Dyer) Webster of Milford NH, Shawn Dyer of Gloucester and Jason Murphy of Salem NH. He is also survived by several nieces and nephews, Brittany and Anthony Quarantello of Billerica, Olivia Ventre of Lynnfield, Brian, Erin, and Thomas MacLennan of Indiana, Ryan, Abigail, Claire, and Amelia Flynn of Salisbury. Many beloved cousins and friends.

He was a graduate of Wentworth Institute of Technology for Architecture, although his physical limitations never allowed him to practice his craft professionally. He didn’t let it deter him and spent countless hours on his computer using his AutoCAD program to build his models and dream home he hoped to have someday.

Rob was a kind, loving, generous, inspirational human being who had a smile that could light up a room. He always thought of others first and taught everyone who crossed his path so much about how to live life to the fullest no matter what your limitations are.

He fought this disease with everything he had for the past 35 years and never let it stop him from doing anything. He grew up riding his snowmobiles, 4-wheelers, driving his family boat on his beloved Ossipee Lake, skydiving and working out daily. His zest for life gave him countless more years than anyone ever anticipated. He had an amazing love for all different types of music and attended more concerts than you could possibly count.

His family and friends meant the world to him and he was so appreciative of everything anyone did for him. He had a great sense of humor and was very sarcastic to say the least. The lights won’t shine as bright without Rob in this world.

A funeral mass will be held on Saturday, March 23rd at Blessed Sacrament Church, 14 Summer St., Saugus MA at 10am.

In lieu of flowers, please send donations to the National Ataxia Foundation, in the name of Robert J. Schriefer Jr., at 600 Highway 169 South, Suite 1725, Minneapolis, MN 55426. To leave a condolence or share a memory, please click below.