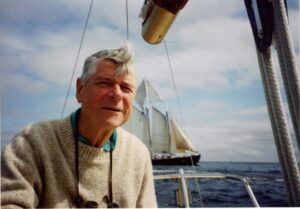 Robert A. Jermain, a longtime resident of Manchester, MA, passed away recently at the age of 89. Bob trained as a naval aviator during WWII and graduated from the University of Maryland with a degree in chemical engineering. He later earned a masters degree in business from Boston University. He was a chemical engineer by trade and after working for several large firms he started and managed his own business, Applied Technology, as a manufacturer’s rep for scientific equipment. Later in life he taught science and mathematics at the North Shore Community College. He was an avid tennis player, sailor and musician, and had a wide variety of other interests including all things mechanical and electrical engineering-related, home restoration and boatbuilding. Bob is survived by his four sons, John, David, Paul, and Tim; three grandsons, Aaron, Colin and Nate Jermain; and his longtime companion, Laura Ells. A service to celebrate his life will be held later this spring.