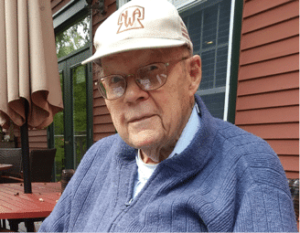 Newton, MA – Robert N. “Bob” Honeyman passed away peacefully January 24th, 2020 in Newton, MA. at age 98. He was married to the late Juanita (Shimer) Honeyman and is survived by his only son, James Honeyman and his wife, Lisa, of Wellesley, MA.

The first of two memorial services will be held on Feb. 5th at 3:00 pm at The Falls at Cordingly Dam, 2300 Washington St., Newton, MA. 02462. A second memorial service will be held on Feb. 22nd at 10:30 am at Eastern Parkway Methodist Church, 943 Palmer Ave., Schenectady, N.Y. 12309. In lieu of flowers, donations may be made to Eastern Parkway Methodist Church, the Hawk Mountain Sanctuary (hawkmountain.org), or to the charity of your choice.

Bob was born in Glen Ridge, NJ, on December 10th, 1921, the second of four children: older brother Edward, younger sister Peg, and “baby” sister Ruth. He graduated from Glen Ridge High School in 1941, worked briefly for the Lovell-Dressell Company, then enlisted in 1942. He served as a staff sergeant in the 8th Air Force, 384th Bomb Group, 547th squadron, at Grafton-Underwood airfield in England, working in gun turret maintenance and ground crew operations. He was honorably discharged in 1945.

After the war, Bob enrolled at Lehigh University, married Juanita Shimer of Auburn, IN. in 1947, and graduated with a Bachelor of Science in Metallurgical Engineering in 1949. He worked for Keystone Carbon Co. for three years in St Marys, PA., where he also served as scoutmaster of the local Boy Scout troop. His son, Jim, was born there in 1951. Bob worked for Thompson Products in Cleveland, Ohio from 1952 to 1954 before accepting a position at GE’s Knolls Atomic Power Lab in Schenectady, N.Y. where he worked for 30 years, retiring in 1984.

Bob was active in Scouting his entire life, earning the rank of Eagle and Order of the Arrow as a teenager, serving as scoutmaster of two different troops, including his son’s Troop 34 in Niskayuna, N.Y., serving on the district leadership council, and earning the coveted Wood Badge Award, Scouting’s highest honor for excellence in outdoor leadership. In addition, he was active at Eastern Parkway Methodist Church, where he served on the Board of Trustees, Finance Committee, as Sunday School teacher, Youth Group advisor, Treasurer and General Handyman for the church Day Care program. He was a willing volunteer for anything that needed to be done.

In retirement, Bob returned to one of his childhood passions: woodcarving and carpentry. He was one of the first members of the Northeast Woodworkers Association, founded in 1991. After his wife Juanita’s passing in 2004, he became active in the Northeast Woodworkers’ Association, where he worked with the late Warren Stoker, who introduced him to the art of making wooden toys for young children. Over the next twelve years, Bob made over 2000 wooden toys, from simple animals to interlocking trains and complex ladder engines with working parts to boats and plans and dinosaurs with moving parts. Aided by the savvy marketing acumen of his friend and assistant, Connie Trigger of Niskayuna, he held a series of toy sales and donated all proceeds to Schenectady area charities, including SICM, Bethesda House and Things Of My Very Own. In 2014, he was featured in the town paper as “The Santa Claus of Niskayuna”.

In the last years of his life, Bob suffered from dementia, which manifested itself as progressive short term memory loss. Difficult as this was for him and for his loved ones, he retained his sharp eye for observing details and his dry but ever active sense of humor. In 2016, he moved to Loudonville Assisted Living Residence, where his good friend, Bill Carlson, was living. In 2017, he moved to The Falls at Cordingly Dam, an assisted living residence in Newton, MA., in order to be closer to Jim and Lisa, his son and daughter-in-law.

Bob lived the last two years of his life on the memory care floor, and even there, his easy-going manner and sense of humor endeared him to everyone he met, spoke or worked with. In his final days with congestive heart failure, a hospice nurse exclaimed, “Everyone here loves this man! I’ve been doing this work for 20 years, and it’s very unusual that EVERYONE has something good to say about someone. It makes me want to do my very best for him.”

Bob Honeyman brought honor, humility, and precision to everything that he did. He held firm principles and insisted there was a right and wrong way to do things, but he was always patient and tolerant of others, even if he disagreed with them. A beloved husband, father, teacher, mentor, leader, and friend, Bob Honeyman will be profoundly missed by all who knew him.