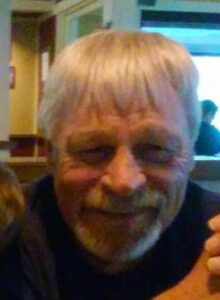 WAKEFIELD, MA – Mr. Robert Richard McHugh 74, of Wakefield, MA beloved partner of Alice L. Whitcomb, died Saturday, April 4, 2020 at Massachusetts General Hospital.
Born in Newton, MA he was the son of the late Hugh and Ethel (Sherber) McHugh. He was raised and educated in Lynnfield was a graduate of Lynnfield High School, Class of 1963. He continued his education by earning a certificate to become a Machine technician.
Bob McHugh was self-employed as a Copier Technician for over 30 years. He was known for his attention to detail and craftsmanship of his work. Before starting out on his own endeavors he work for Advanced Copier in Wilmington, MA and as a mechanic at the Shell Gas Station in Lynnfield, MA.
Bob was passionate when it came to his adopted family. His grandchildren were a major part of his life. Never missing a sporting event. He walked the Jimmy Fund walk for his Granddaughter Lexi-Skye each year since her diagnosis.
During Football season you could find Bob along with the “Deckheads” on Jeff’s back porch watching his beloved Patriots. Bob would never pass up a good game of Cribbage with his friends.
A longtime resident of Reading, MA, Bob also resided in Lynnfield. He supported his family and friends in all of their endeavors and was a devoted partner to, Alice. He will be deeply missed by all.
Bob is survived by his loving partner of 23 years, Alice L. Whitcomb of Reading, MA, and her 2 sons John Johnson Jr. of Malden, MA and Michael Alden of Florida, his sister Linda Carlson and her 3 children of California, his sister Patricia Warner of Ashby, MA and her children Jason Warner of Ashby, MA and Tami Howard of New Bern, North Carolina. His sister in-law Wilma McHugh and his late brother Joe McHugh and their 7 sons of Georgia. Bobs 5 grandchildren, Lexi-Skye, John Wesley, Ivan, Michael Jr. and Logan.