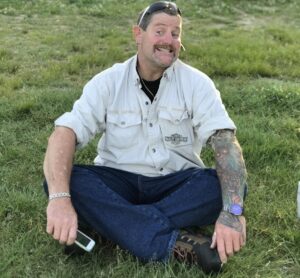 Robert Sergi (Bob), 52, of Malden, MA, passed away peacefully surrounded by family on Monday, January 10th, 2022 at 2:36pm. Bob was born on April 11, 1969 in Malden, MA to Richard Sergi Sr. and the late Judith Ann Smith. Survived by his love Christine; Daughters, Judith Sergi and Rebecca Sergi; Brothers, Richard Sergi Jr. and his wife Tracy, Steven Sergi and his wife Eileen; And many nieces and nephews. Bob spent most of his childhood in Malden with the Linden crew and there is where he made many lifelong friends and memories. He was an avid member of the East Side Club in Malden where his name will always be remembered. Bob was strong and known for his sense of humor, creative mind, infectious smile, and his quick wit. He was the friend that always picked up where you left off as if no time had passed – whether you liked it or not. He worked as a heavy machine operator for most of his career and fulfilled his passion of landscaping. In his free time, Bob immersed himself in the motorcyclist culture and as we all know.. favored his Harley Davidson. Every Fall, Bob would make an effort to ride the Kangamangus highway and appreciate the New England foliage. A lover of nature, Bob enjoyed fishing with his children and exploring the outdoors. He was also an amazing chef and his speciality dishes were chicken cordon bleu and chicken masala. Bob was one of a kind. He will never be forgotten but forever remembered and missed by all who were fortunate enough to know him.

Relatives and friends are respectfully invited to attend the visitation and celebration of life Monday, January 17th 2022 at Boston Cremation and Funeral Home located at 287 Main St, Malden, MA 02148 from 10AM-12PM