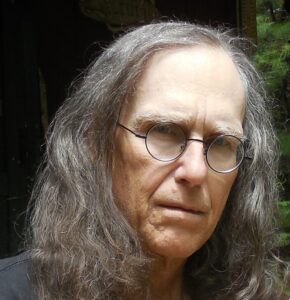 Though born and raised in Atlanta, he moved with his family to Boston more than 30 years ago
and sometimes adopted the persona of an old-line Yankee who had been driven from the woods
of Vermont to Boston by a severe allergy to plaid flannel.

Spencer graduated from North Springs High School in Sandy Springs, Georgia, where he was editor
of the student newspaper and a combatant in the BB gun war between the staffs of the
newspaper and the yearbook. He met his wife and life partner Linda Kush while attended
Nebraska Wesleyan University. For 14 years, they lived in Atlanta, where their son Jesse Morrow
was born, and where Spencer was an all-star shortstop in the Advertising Softball League.

In Boston, he was a freelance proofreader, correcting spelling blunders in everything from candy
wrappers to biotech annual reports.

He was a cofounder of the Allston-Brighton Community Theater and led its playwriting group. He
appeared in the ABCT’s productions of Our Town, Cat on a Hot Tin Roof, The Miracle Worker, How
I Learned to Drive, and Bad Seed.
He was also a gifted fiction writer. He wrote a series of comic mystery novels featuring the brilliant
but diffident private detective Ben Weisfoygl and read them aloud to friends at his delightful
dinner parties. In 2015, he posted his masterpiece, the novel Jasmine Dancing, in many
installments on Facebook.
Facebook was a social and creative outlet, especially as his health began to decline in recent years.
He and like-minded people from around the world, many of whom he never met, formed a
creative community, sharing zany humor, poetry, art, and creative writing.

He had a passion for classical music and systematically listened to the complete works of Mozart,
Beethoven, Haydn, and JS Bach. He was a self-taught composer and wrote six symphonies, an
opera, two song cycles, and many chamber works.

He loved building model airplanes from kits and also built models of baseball parks Ebbets Field
and the Polo Grounds out of balsa wood, relying on photographs and his imagination.

His found joy at his second home in Harmony, Maine, where he fed the birds and squirrels,
paddled his kayak, played golf at Dexter Municipal Golf Course, observed the night sky, and spent
hours on the porch with a mug of tea.

As his health declined, he worked crossword puzzles, cooked tasty stews, binged on offbeat TV
mysteries, and read Dickens novels with the goal of reading the author’s complete works.

Spencer was predeceased by his parents, Henry and Barbara (Darragh) Morrow. In addition to his
wife and son, he is survived by daughter-in-law Urvi Mujumdar, brothers J. Kell Morrow and Bruce
(Cindy) Morrow, sister Barbara Morrow, and nephew William (Angel) Morrow.

In lieu of flowers, the family suggests memorial gifts to The MDS Foundation Inc.,
https://www.mds-foundation.org/donate; or the Crohn’s and Colitis Foundation,
crohnscolitisfoundation.org; or a charity of your choice.