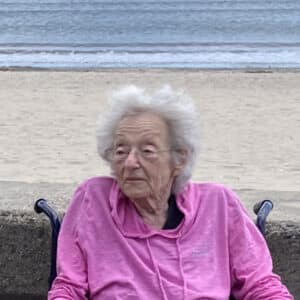 Roberta Gordon of Cambridge, Massachusetts, died June 25, 2022, at Care Dimensions Hospice House in Lincoln. The cause of death was cancer. She was 82.

Roberta Irene Gordon was born May 14, 1940, in Newark, New Jersey, to Henry Gordon and Frances Kurland Gordon. She often told stories of the complicated life of the extended family, many of whom lived together in a single building. Around 1952 the Gordons moved to Miami, Florida. Roberta graduated from Miami High School in 1957 and attended Sophie Newcomb College in New Orleans (now part of Tulane University). Roberta claimed she picked a French major over English because it offered better travel prospects for a junior year abroad. In any case, her year in France in 1959–1960 established a lifelong attachment to France and French culture. She took great pleasure in talking, with near-native accent, with any Francophone person she met.

In 1961 Roberta graduated from Sophie Newcomb and entered the PhD program in French at Yale, at a time when Yale College did not admit women undergraduates. She did not find Yale particularly friendly to women or to outsiders to the Ivies.  She left three years later (eventually receiving her MA from Yale in 1968) and moved to Boston to teach French at a series of institutions, including the Cambridge School of Weston and Northeastern University. Around 1970 she joined the French faculty at Salem State College (now University) on the North Shore. A turbulent decade followed, in which her support for student protests over civil rights and the Vietnam War pitted her against the college administration. She was proud of having taken the side of the students. A Salem State colleague from that time also remembers Roberta as part of a group of women faculty activists fighting discrimination and pay inequity. Roberta also cultivated herself as a creative writer, attending workshops and publishing short stories in several little magazines—Ascent, Confrontation, and Ploughshares—and drafting a novel (never published).

In the same period she met English physicist Jeffrey Goldstone, who became a professor at MIT in 1977. They married in 1980. In 1982 they had a son, Andrew, and Roberta left Salem State. She continued to write occasionally, publishing articles in local newspapers. The family spent several years in Europe, thanks to Jeffrey’s sabbaticals, but at destinations organized to no small degree by Roberta—Paris around 1983–1984, Rome in 1989–1990, Paris again in 1997. Later she continued to travel with her family, both within the US—Florida and California were favorite destinations—and in Europe, including numerous visits to England, France, Italy, and Switzerland. She loved the museums and monuments of Europe, but she loved the beach and the Atlantic Ocean at least as much. The family spent many summers in Wellfleet in Cape Cod.

Roberta was delighted at the birth of her granddaughter, Helen, to her son Andrew and daughter-in-law Anne in 2017. In late 2021 Roberta overcame increasing pain and disability to make one last trip to visit them in central New Jersey. Of many harms done by the Covid-19 pandemic, she felt most keenly the enforced isolation and immobility.

Roberta’s friends and family remember her for her intelligence and her often biting sense of humor. She was a constant critic of others and of herself, but she also took great pleasure in knowing and caring about people. A cosmopolitan who spoke Spanish and Italian as well as French, she was always trying to escape the limits in her local surroundings. One of her favorite poems, by the Spanish poet Antonio Machado, says: “Caminante, no hay camino, / se hace camino al andar” (Wanderer, there is no road / the road is made by walking). Yet she also liked to quote Joachim du Bellay’s famous poem about longing for home: “Heureux qui, comme Ulysse, a fait un beau voyage…” (Happy the man who, journeying far and wide / as Jason or Ulysses did). These poems speak of a solitary traveller, but Roberta was justly proud of the many lasting attachments she formed in the course of her restless itinerary.

She is survived by her sister, Harriet Kossman, her husband, Jeffrey Goldstone, her son, Andrew Goldstone, and her granddaughter, Helen Goldstone. A small memorial was held at her house in Cambridge on July 23, 2022.