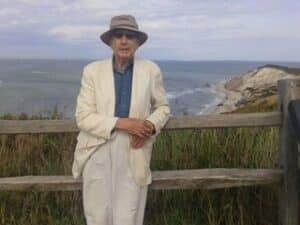 After 98 years on this earth our dear, proud and strong father,  Rodolfo Cardona, left us on Tuesday, September 20th. Born in San  Jose, Costa Rica on the 17th of January 1924, he was the son of  Ismael and Julia Cardona. He grew up the youngest sibling in a large  family and is now joining his brothers and sisters in the plane that  follows this earthly existence. He has been a guiding force for our  family and a loving caretaker for his wife for over a decade. We will  all look up to him to continue being a light for us to follow.

Our Papa came to the United States in 1943, at the age of 19, in  order to continue his studies. This began a lifelong journey of  learning and intellectual exploration that spanned many disciplines.  He explored art and sculpture, mathematics, philosophy, languages  and literature. He followed his career opportunities across the  United States starting in Louisiana as an assistant instructor while  obtaining his first degree and continuing at the American Institute of  foreign trade in Phoenix, the University of Washington, Case  Western Reserve in Cleveland, both Catham College(Pittsburgh)and  later the University of Pittsburgh, the University of Texas at Austin  and eventually Boston University from where he retired in 1988  after leading the University Professors

Program (Interdisciplinary Department) for ten years. He was named professor emeritus at BU in 1991. After retirement he  continued his work becoming Resident Director of the International  Institute in Madrid as well as Academy coordinator of the  Residencia de Estudiantes between 2000 and 2005.

Throughout this long life he guided and influenced so many: students many of whom later became colleagues and dear friends. He wrote books both to gain insight and to further expand the  understanding of many of his beloved figures of Spanish literature and drama. He wrote stories and novelettes for the sheer enjoyment of it, often sharing stories of his childhood growing up in San Jose.

The latter years of his life he devoted nearly all his prodigious energies to giving to his dearest Electra, wife, mother and yiayia to our family, the care she needed. We are all so grateful to him for the  amazing efforts and sacrifices he made on her behalf.

Papa exerted a very strong gravitational pull on our family. We came together most every year at the family’s beloved Martha’s Vineyard home and there was nothing our dear father treasured more. He loved to sip wine and regale us with stories or tell jokes. As we continue to gather now without his presence at the table it  will be up to us to carry on and honor his story and his life.