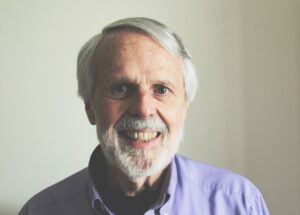 The second of two sons born to a hairdresser, Hazel Loretta Ensor Denhardt,
and a World War II veteran, William Charles Denhardt, Ronald Charles
Denhardt was raised at his maternal grandmother’s home, in the small town of
New Freedom, Pennsylvania. As a teenager, he moved back to Townsend,
Maryland, to live with his mother and her second husband and attend public
high school. Following some Junior college classes, he enlisted in the army, and
he served his three-year commitment, mostly in Japan, working in
communications. He then paid for college at the University of Maryland by
working for the railroad and then at a steel mill. Subsequently, he earned a PhD
in Economics at the University of Minnesota.

His 12-year marriage to Barbara Ann Denhardt ended when he returned to the
East Coast for his first professional job at Data Resource Institute. He
subsequently worked for Eastern Gas and Fuel, Jensen Associates and WEFA,
a consulting company that was taken over, multiple times, before he was laid off.
In 2003, he and a business associate, Mike Lynch, began their own company,
Strategic Energy & Economic Research, from which he retired, at the age of 70.

In the early 1990s, Ron’s meditation practice began in earnest. He studied with
many teachers before settling into practicing and volunteering at the Cambridge
Insight Meditation Center. Over 10 years ago, he became a CIMC Teacher and
continued happily teaching there for as long as he was able.

After nearly a year of treatment for metastatic cancer, Ronald Charles Denhardt died peacefully at his home in Winchester, MA on March 3, 2021, in the presence of his wife and two adult sons. He was 77 years old. He is also survived by his brother and niece, Gary and Natalie Denhardt, who live near Baltimore, Maryland.

A Message from Ron’s immediate family about Donations

Please consider joining us in making a donation to Cambridge Insight Meditation Center. If this is something you are able to do, please send a check of any amount to 331 Broadway, Cambridge, MA 02139, with a note that your gift is in Ron Denhardt’s honor. All proceeds will be made available for the benefit of the People of Color Sangha. Thank you very much for your generosity!

A link to the recording of the Memorial Service can be found at:
https://cambridgeinsight.org/in-memory-of-ron-denhardt/