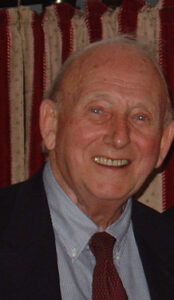 Ronald Lucas of Weston died May 27, 2012 following an extended illness. He was 81. Mr. Lucas was born in Ipswich, England on March 4, 1932 and grew up during World War II. As a young man, he received various awards for ballroom dancing. He served on active duty and in the reserves of the British Army, Royal Engineers. As a manufacturing engineer he later worked for Bristol Aerojets, producing “Skylark” sounding rockets including the Italian contribution for the International Geophysical Year of 1957. The “Skylark” has been considered the most successful rocket program in history, carrying scientific instruments and experiments to explore the Earth’s upper atmosphere. After immigrating to the United States in 1966 he continued his career with Essex Engineering, Inc. of Lynn, Massachusetts where he contributed to national defense, aircraft safety, and space missions including Apollo 13. Mr. Lucas was a strong supporter of engineering education and provided mentoring opportunities for students at LynnVocationalTechnicalSchool and NortheasternUniversity. He is a past chairman of the NorthShore chapter of the Society of Manufacturing Engineers. Mr. Lucas is recognized for his accomplishments by his inclusion on the Wall of Honor at the National Air and SpaceMuseum’s StevenF.Udvar-HazyCenter in Washington. One of his rockets can be seen on display at the Smithsonian Institution. In his retirement, Mr. Lucas enjoyed golf, tennis, gardening and world travel. Mr. Lucas was the widower of Jean Leverick of England, his wife of 40 years. He is survived by his son, Simon, and daughter-in-law, Suzanne Lucas of Fitchburg, as well as his daughter, Elizabeth, and son-in-law, Jorge Atilano, of Cerritos, California. Mr. Lucas enjoyed talking about his grandchildren, Sage Lucas and Andrew Atilano, and was extremely proud of the accomplishments of their young lives. For the past 13 years, he cherished the love of his companion, Marge Johnson of Weston. He also felt the caring and support of her children and relatives who he considered his “second family”. A memorial dinner to celebrate his life will be held at a future date.