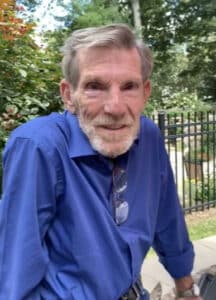 Ronald “Stoney” Stoneking of Pawtucket passed away on July 23, 2022 at the age of 78.  In typical Stoney style, he called the shots until the end. He was able to say goodbye to those that mattered most to him and leave them with parting words of advice. He did not live a flashy life as he believed in quality over quantity and didn’t need a lot to make him happy.  Nothing made him happier than spending Sundays with his wife, daughters and grandchildren watching tv, drinking coffee and waiting for Bob, his cat, to make an appearance.  Spending time together was what mattered most to him.  He was an avid animal lover and we have faith that all his past pets greeted him as he entered heaven.

Stoney was born to Lawton and Lucille (Day) in Moberly, Missouri on January 27, 1944.  He graduated from Moberly High School in 1962 before joining the United States Navy where he served for 4 years.  It was at a dance that Stoney met the love of his life, Georgette.

Stoney is survived by his wife, Georgette (Brockmann); their children Renee Palardy and her husband Don,  and Jennifer Ferrell and her husband Rob; his 3 grandchildren, Analee, Savannah and Wyatt Palardy; his brother, Dennis; and many nieces and nephews and brother and sisters-in-laws.

Donations in Stoney’s name can be made to St. Jude Children’s Research Hospital at