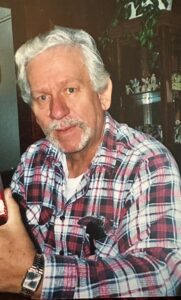 Ronald William Jewett, 79, of Maynard passed away October 22 nd after a short battle with cancer.

He was born December 9, 1942 In Dixfield, ME, to his parents the late Earl & Emeline (Blay) Jewett of Vermont. He was predeceased by his brother Larry Jewett and his wife Jeannette of NH. He is survived by his brother Richard Jewett and his wife Lucille of NC and his sister Gail (Jewett) Pinto and her dear friend Dennis Hussey of VT, his niece and caretaker Lisa {Jewett] Imbody and her husband Jim, several other nieces and nephews and many friends. Ron liked fishing and deer hunting and spending time with his family.

He was an avid Patriots and Nascar fan and enjoyed going to antique car shows. His favorite pastimes were playing darts and singing karaoke with his friends on his own karaoke machine.

A private memorial service will be held for family only.