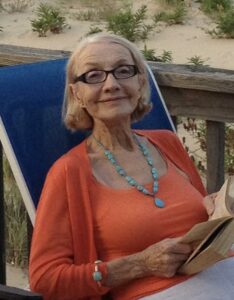 Ronwyn Ingraham, 84, known as “Ronnie” to friends and family, died peacefully on April 29, 2018, in Reading, Massachusetts, surrounded by her family. She outlived her two younger siblings, Diana Small of Burlington, Iowa and Mike McLennan of Duncan, British Columbia.

Ronwyn was born on July 16, 1933 in Ottawa, Canada to Trevor McKee McLennan and Alwilda Lillian Grace Martin McLennan. She was one of three women to graduate from Queens University in Kingston, Ontario, with a Commerce Degree. She then joined the staff of McLean’s as a researcher. In 1956, she won the bathing suit competition in the Miss Canada beauty pageant, coming in third place overall, which enabled her to pursue acting and modeling in Toronto.

In 1957, she married William White Ingraham II of New York City and Cape Elizabeth, Maine. The newlyweds lived in Toronto where she worked for the Canadian Broadcast Corporation. After a brief stint in New York City, the couple moved to Washington, DC. In 1964, Ronwyn joined CARE, the global humanitarian organization. Her tenure there would exceed three decades, most notably as the Regional Director of the Washington field office, during which she raised tens of millions of dollars for international humanitarian aid efforts. Upon retiring at 64, she joined United Airlines in 1997 as a flight attendant, satisfying both her love of travel and meeting new people. She remained on the staff of United until her death.

Ronwyn is survived by her four children, Diana B. Ingraham (and husband John F. Ross), Jeffrey Ingraham (and Pamela), and twin daughters, Trevor Ingraham and Eleanor Axelrod (and husband Matthew), four grandchildren, Grace and Forrister Ross, and Sabina and Eliana Axelrod, as well as seven nieces and nephews and their ten children.

Full of boundless energy, with a sparkling smile, and wry sense of humor, Ronwyn always was willing to share tips about her frequent international travel adventures. She had friends around the world and loved being on the move. She led her family on adventures both at home and abroad, from the Appalachian Mountains to Haiti and the Virgin Islands, to Pepieux, France.

At home, Ronwyn loved to entertain, her blue crab dip and honey baked ham and homemade eggnog earning some local fame. Summers she spent with friends and cousins at the Delaware shore, or up in Orillia, Ontario. She took the twins across Europe, a Fromer’s Europe on 25 Dollars a Day tucked under her arm, and later on a cross-country drive to British Columbia, camping at various national parks and forests along the way. She took up scuba diving and windsurfing after the age of 40, and trekked in Nepal after retiring. She loved to play tennis, cross-country ski, and to dance. She could always be found with a historical romance novel in hand, eagerly entertaining company with stories from on the page and off.

A lifelong Episcopalian, she was a member of St. John’s Norwood Parish in Bethesda, Maryland, where a celebration of her life will be held on Saturday June 9, 2018 at 3 pm. In lieu of flowers, please donate to CARE.