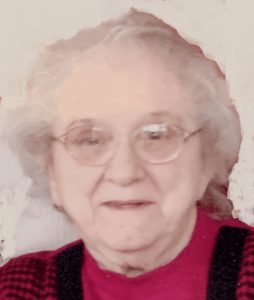 On Friday, June 5, 2020, Rosario “Rose” (Turinese) Brunelle died at age
99 while residing at the Wingate Nursing Home in Norton, Mass for the
last 6 years. Prior to that Rose spent most of her life in her hometown
of Mansfield Mass with a brief time in Wareham for two years.

Rose was born on May 12, 1921 in Mansfield, Mass to Sabatino “Sam”
and Eleanora (Colesanti) Turinese. She attended Mansfield High School
before she left to work in her father’s grocery store. Rose also worked
at the chocolate factory in Mansfield prior to meeting the love of her
life. On July 26, 1941, she married Armand Joseph Hamidos Brunelle
from Taunton at St. Mary’s Church in Mansfield. They raised three sons,
Armand Joseph Jr., Robert Joseph and Francis Norman. Rose and
Armand were married for 64 years until Armand’s death on May 16,
2005.
Rose was a wonderful cook and homemaker. She was the matriarch of
the Brunelle family and often hosted family dinners on Sundays and
holidays. Cookouts for the extended family were regularly held at her
home on Ware Street and later Thornton Road. Rose and Armand also
loved gardening and would supply the family with fresh tomatoes,
cucumbers, and butternut squash each summer. They also enjoyed
short trips to Onset Beach where they would sit and watch the people

and the surf. Preferring not to fly, they took many bus trips to
destinations including Florida, New York, and Nova Scotia.
St. Mary’s Catholic Church in Mansfield was Rose’s home parish from
birth until her death. Her and Armand were active communicants and
helped at the Fall Fair. They were also active members of the Sons of
Italy.
Rose was preceded in death by her husband, Armand, their son, Robert
and his wife Diane, her daughter-in-law Shirley and her great grandson
Andrew Mistler. She was the last living member of her immediate
family which included her brothers Morino Turinese, Samuel Turinese
and sisters Sister Virginia Agnes, CGS (Mary), Pierina (Turinese) Oliver
and Helen (Turinese) Pimental.
She is survived by her sons, Armand Jr. and Francis and his wife Susan,
eight grandchildren, thirteen great grandchildren and many nieces and
nephews.
Relatives and friends are invited to attend the Mass of Christian Burial
for Rose on Saturday, June 13, 2020 at St. Mary’s Church on 330 Pratt
Street (Rte. 106) Mansfield, MA at 11 o’clock a.m. Burial to follow at St.
Mary’s Cemetery Mansfield, MA. Calling hours have been respectfully
omitted.
The Brunelle family understands in the wake of the current outbreak of
coronavirus disease that many of our family and friends might be
concerned about attending the Mass and services. We wanted to let
them know that we appreciate their concern and would be just as
happy receiving a card or note from them in lieu of their attendance.
For more information on whether you are a high risk person you can
visit the CDC website at: https://www.cdc.gov/coronavirus/2019-
ncov/specific-groups/high-risk-complications.html