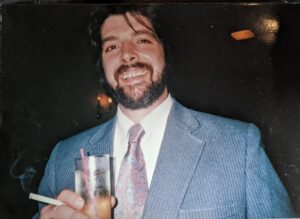 Roy Edwin Popp was a resident of Saugus, MA for his entire life. He grew up on Denver Street where he made many great childhood memories. He met his high school sweetheart and future wife right across the street from his childhood home. After high school he joined the National Guard. Roy and Christine (Bowker) were married in 1972 and continued to live in Saugus and raise their two children, Jennifer and Michelle.
He was an amazing father and always worked hard to support the kids’ hobbies. The family took many cherished vacations to the White Mountains of New Hampshire, and to Moosehead Lake, Maine.
Roy was an avid outdoorsman and spent many hours hunting and fishing with family and friends. The highlight of his year would be his annual November hunting trip to Grand Falls, Maine, where they would rent a camp on Saponic pond and spend the week deer hunting. He liked telling hunting and fishing stories and sharing his experience with those who were interested in learning. He was often out walking the family’s Labrador Retrievers and getting them ready for bird season. He spent his spare time perfecting his fly tying, taxidermy work, and maintaining his backyard gardens.
He worked as a machinist at GE, and eventually moved on to Ametek in Wilmington.
In his later years he took great delight in feeding the birds and other wildlife that showed up to frequent the bird feeders that he made sure were always full. Every morning he looked forward to his 9am social hour with his Harmon Road neighbors.
He became a grandfather in 2014, and again in 2019. There was always a smile on his face when he watched his granddaughter and grandson play.
If you knew Roy, you knew his gruff exterior, wide ranging sense of humor, his colorful vocabulary, and his “no bones about it” attitude. In typical Roy fashion on Saturday, September 19th, he informed the family that he was “sh**tin’ the bed”. Only his friends and family would understand the humor in that. After a long battle with cancer he passed away on Saturday evening. To all his family and friends that were inevitably called a “beaut” at some point in time, please raise a glass in his memory.
Roy was the beloved husband of Christine (Bowker) Popp, father of Jennifer Popp and Michelle (Popp) Dellascio & her husband Alan Dellascio. Adoring Grandfather “Bapa” to Jessica and Jason Dellascio. He was the son of the late Roy Popp and Alice (Samson) Popp, and brother to the late Wayne Popp and Christopher Popp. He is survived by his siblings Sharon (Popp) Wilson, Jeffrey Popp, and Dawn (Popp) O’Hagan. He was son-in-law to Robert and Oretha (Cloudman) Bowker. He is also survived by many nieces and nephews.

Per his wishes there will be no services. He will be cremated, and in lieu of flowers, those interested may make a donation to: Maine Dept. of Inland Fisheries & Wildlife, Bureau Warden Service in his name. Roy had a deep respect for the Wardens and their K9 companions, most especially a dog named Grace.

Checks may be made out to: Treasurer, State of Maine and in the memo area of check/money order (or a note enclosed with the check) please write ‘Search and Rescue’ or ‘K9 team’ and ‘in the name of Roy Popp’.
Checks can be mailed to the address below.
Maine Dept. of Inland Fisheries & Wildlife
Bureau Warden Service
284 State Street
41 State House Station
Augusta, ME 04333-0041