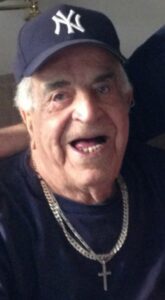 Samuel Paul Volpe, a lifelong resident of Quincy, passed away peacefully on Friday, September 27, 2019, one day shy of his 97th birthday. He was the husband of the late Pearl May (Parody) Volpe for 63 years. Born on September 28, 1922 in Quincy, Massachusetts, he was the loving son of the late Dominic and Lina (Ritucci) Volpe. Sam was one of eight children from their close Italian family, all of whom were also lifelong Quincy residents. Sam was preceded in death by his siblings Alba, Pamie, Americo (Trigger), George, Flora, William, and Mary.

Sam is survived by his daughter Donna Driscoll and her husband John Driscoll of Milton, as well as his son Paul Volpe of New York. He was the cherished ‘Papa’ of Mark Driscoll of Winchester and Jacqueline DeFreitas and her husband Robert DeFreitas of Milton. He was very proud to have become the beloved great grandfather, ‘Papa Sammy,’ of Jacqueline and Rob’s children, Lucy Amelia and Charles Samuel DeFreitas. Sam is also survived by all of his loving nieces and nephews of the Volpe family.

Sam was a graduate of Quincy High Trade School and went on to be a lifelong employee of the Pemberton Roofing Company as well as a proud member of the Sheet Metal Workers Local 17 union. Sam served the nation as a member of the US Marine Corps during World War II. He was stationed in the Pacific during the war and exemplified the expression, “Once a Marine, Always a Marine,” throughout his life, becoming a member of the local VFW and serving as one of their Post Commanders. He also proudly flew the USMC and US flags in his beautiful yard at his home on Rawson Road. Sam was an avid gardener who enjoyed spending his time outdoors while working on having “the greenest grass in Quincy” as well as a healthy garden full of tomatoes and hot peppers.

A funeral service for Sam will be held at the Boston Cremation, 116 Franklin St., Quincy on Tuesday, October 1 at 11:00 AM.. Visitation will be held prior to the funeral service from 9:30 to 11:00 AM. Relatives and friends are invited to attend. Burial to follow at Blue Hills Cemetery, Braintree. In lieu of flowers, the Volpe and Driscoll family request that donations be made in Sam’s name to the Semper Fi Fund, (https://semperfifund.org/donate/).