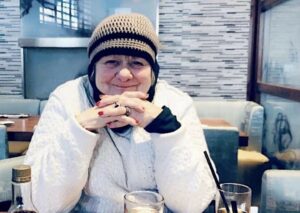 Sandra Jean Smith born June 19, 1950, has left us with morning & sadness however lightened
by the past month she spent in her Daughter & Granddaughter’s home, reviewing her life in
peace and with gratitude under hospice care provided by Care Dimensions.
As a child, she attended school in Medford, Mass. until her family moved to Somerville. The
family moved into a triple-decker on Highland ave for several years before her parents Alton G.
Smith and Theresa purchased a two-family home with the GI bill on Cedar street in 1967. The
family lived on the second-floor Sandy and her four siblings Bobby, Eddie, Al and Karen all
squeezed into a few bedrooms and one bathroom. Motivated by such a situation, as a young
woman, she found her way out and married at the young age of 18. The marriage lasted a short
time, after a miscarriage and a conflict with her desire to explore her passion for a singing
career.

Sandra was an A student all through elementary and Jr High. In Jr High and High school Sandy
was recognized for her beautiful singing voice. She led many school choir performances, as well
as singing at the High School dances in the Somerville High Gym. After high school the rock n
roll world of the late ’60s and ’70s was dominated by men, However, Sandy organized and
became a leader of several bands. She sang in the style of Grace Slick and Janis Joplin (even
though she did not like Janis Joplin)

During that time she also worked at Kennedy Butter and Eggs in Somerville. Like so many
independent young people she had many jobs. As her free-spirited self, she picked up and left
for NYC, where she landed a gig as the lead singer in the national touring show of HAIR. In
Iowa at the conclusion of the national tour, there was a breakup cast party in which Sandy was
celebrating and unknowingly was given, which in those years was common to celebrate with
psychedelic drugs (LSD). Sandy had a bad reaction and her father had to fly out to bring her
home. Sandy struggled with mental illness from this point forward and that ended a hopeful
career of a successful professional singer in the music industry.
After a few years, she recovered and met Charlie Casey and had a daughter, whom they named
Darla Casey-Smith her only child, but she had parents who supported her and Darla. Unable to
raise her daughter at age 6 her parents helped take on the responsibility but she was always
involved with the family.

Sandy had found balance during the 1990s and was working as a cashier at Johnny
Foodmaster when a criminal stole her identity. Due to the failure of the courts to update their
records, she was falsely arrested at her home for a crime a woman posing as her committed.
Handcuffed and disrespected as she tried to get the papers that were inside her home, the
police took her to jail. Her court-appointed lawyer called a brother and told him, “We know there
was a mix-up and that your sister is innocent. The best way to deal with this is for her to plead
guilty and the judge will drop the charges”. Sandy and her brother refused such an outrageous
solution. We hired a lawyer and eventually, in court, she was exonerated. This horrible event
that lasted months set Sandy back and after a short stay at McClean Hospital she was free, but
the scars of that experience caused her harm to the point that she never could work again. One
good thing came out of her false arrest. Senator Pat Jehlen of Somerville was informed of her
case and wrote the first law in Massachusetts that dealt with the new and rising crime of identity
theft.

Living at senior housing on Warren Ave outside of Union Square for many years, Sandy enjoyed
visiting and advocating at Ruby Rogers Center in Union Sq.

In 2003 her granddaughter Emma Rose was born, this lit up her life and Sandy would take care
of her while her daughter would work a few days a week. Her granddaughter and her had a
bond immediately. Emma’s first laugh was from Sandy’s interactions. Emma learned all about
makeup and dressing to the T from her grandmother.
As Sandy got into her later years, her mental illness reemerged and made it very difficult for her
to maintain her own personal housing. She found a sense of community in living at the
Linderman shelter in Boston. Here at the shelter, she met many young adults who were
experiencing what she had experienced in her 20’s and she was able to counsel and give hope
to these young adults. She found happiness in this but also enjoyed her freedom and
independence even though it was in a dangerous setting for an older woman. Her family worried
constantly about her living there, tried to convince her to get into housing, but she made this
choice and her choice was freedom over security.

Last year Sandy had many MGH hospital visits because of her physical illness. She and her
family were always treated with respect and we were amazed at the unprejudiced care a
homeless person would receive there. A year ago Darla was informed that Sandy had serious
health problems that at any time could end her life, but every time she came out of MGH her
spirit was so strong it was hard to see the threat. That was until the last time when hospice care
was offered and we knew this time was different.

Mid-December of 2020 a few days before an impending snowstorm, her daughter Darla once
again asked if she would like to stay over and she agreed. This time she found herself living in a
townhouse with her Daughter working full time at home, a 17year old Granddaughter Emma in
a virtual school, three rescue chihuahua/mixed dogs, four fish, and her brother Al who would
visit daily. Good food, Music, Laughter, Jokes, Cigarettes, Sweets, and every request fulfilled
Sandy’s humor and spirit blossomed. Sandy was very aware of her situation but she shined
every day. Sandy was so grateful for the loving care, peacefulness, and the time to celebrate
the holidays with her family. What was to be a short respite at her daughter’s home turned into
26 days of reconnection.

We can keep these memories alive and be thankful that her passing was peaceful. Sandy’s love
and fight to maintain her freedom will continue to inspire us. With love honor respect and dignity
we embrace Sandy’s spirit as it lives on through us all.
We leave you with Sandys final written thoughts unlike her usual strong verbal declarations:
A huge blizzard blew me into Darla’s doorway millions of snowflakes pounding on my wings to
bring me into this warm cozy kitchen where I have my place!