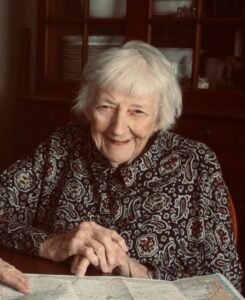 Sara (Shaw) DuBois was 95 when she passed away on February 11th. Sally grew up in Webster, MA with five siblings and graduated from Rhode Island School of Design in 1946. She met her late husband, James E. DuBois, in Providence and raised her two children there. Trained in industrial design and mechanical drawing during the war years, she was employed for a time in commercial jewelry design and in industrial machine production before becoming a full-time mother and homemaker. After her children were grown, Sally became interested in weaving and in the study of pattern design. She studied the work of Bertha Gray Hayes, a little-known overshot-style weaver, and brought Bertha’s work to the attention of other Rhode Island weavers who went on to create a book on the subject. Twenty-one years ago, as a recent widow, she moved to Waltham with her daughter’s family, becoming an indispensable aide to them. She is predeceased by her son, Ethan E. DuBois of Bristol, RI and leaves her daughter-in-law, Linda Borges DuBois, her daughter, Tobey Fidler (and devoted son-in-law, Mark Fidler) and six beloved grandsons along with two great-grandchildren. Sally will be remembered for her quiet interest in books, recipes, knitting patterns, handyman projects and current events. In times of sorrow, she would remind her family to, “go somewhere and just look at the sky”. She has passed on a love for the seashore and the natural world.