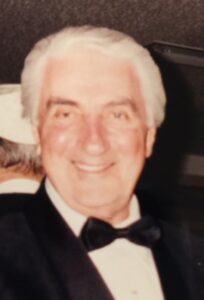 Saunders Mishkin started his career in apparel working in a men’s clothing store in the early 40’s. He always liked good clothes and continued in apparel related fields his whole life. With friends from his Chelsea roots, they started tuxedo rental stores, growing to six locations. In 1970 he opened up the first of several tuxedo stores, called Mr. Saunders Formal Wear. Saunders continued in the tuxedo business until finally retiring at age 92.

Saunders Mishkin was a larger than life character and will be missed by all that knew him.

All are welcome to come sit Shiva at Temple Ner Tamid, Peabody MA on Tuesday, July 18 from 8-9:30pm.